END_OF_DOCUMENT_TOKEN_TO_BE_REPLACED

Naomi Witherspoon must mediate a power-sharing agreement between Jehovah and the pagan gods. But she’s surrounded by Tricksters: her new boyfriend Joseph; the operator of a fracking facility near their friend’s ranch; and maybe even the filmmaker she’s just met. What could possibly go wrong? 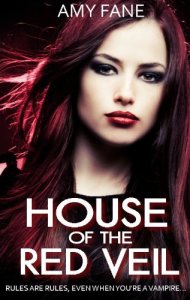 Antonella Ambrosetti may be a vampire, but she refuses to be a monster. The members of her exclusive house of vampires, the House of the Red Veil, all live by her strict rules. But, when tragedy strikes and the prime suspect is her former companion, Dante, all her rules go out the window in her quest to keep her house safe.

Along the way, she struggles with her growing attraction to Seth, the warlock that makes her cold, dead heart race, and the desire of Nicky Marchesi, son of a prominent mob boss, to become a vampire against his father’s wishes.

House of the Red Veil, the urban vampire fantasy by Amy Fane, is available from Amazon.com.

Naomi’s having a bad week. She’s already overwhelmed by setting up her solo mediation practice and second-guessing her relationship with Joseph. An old acquaintance seems to be setting up shop down the road from their friend Charlie’s ranch. And Charlie has a new pal: a filmmaker who might be the Investigator – except that he doesn’t exactly believe in teamwork.

Then a jaguar attacks her in downtown Denver….

Fissured: Book Two of the Pipe Woman Chronicles, the urban fantasy by Lynne Cantwell, is available on Amazon.com, Amazon UK, and Smashwords.