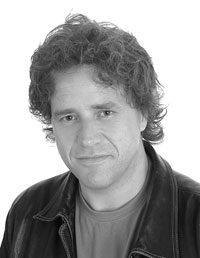 I’m very pleased to announce that Chris James is joining the staff of Indies Unlimited as a contributor. Chris has an erudite writing style and a sharp dry British wit. Those qualities in combination with a full head of hair are bound to make him a standout here at Indies Unlimited.

He is 6′ 4″ tall and is left-handed, which is more problematic than it sounds, as all our uniforms are right handed.

Though originally from The U.K., Chris now lives in Warsaw, Poland, with his wife and three children. He published his first novel in 2010, a futuristic court-room thriller called Class Action, and his second in 2011, called The Second Internet Café, Part 1: The Dimension Researcher, which takes the sub-genre of Alternative Realities to its logical conclusion. He is currently writing the second part of The Second Internet Café trilogy and, for light relief, likes to have a go at writing comedy.

Please give Chris James a warm welcome to the Indies Unlimited Army.*

*The Indies Unlimited Army is a lot like the KISS Army, except we are about writing rather than music and less than half of us wear makeup (as far as you know).