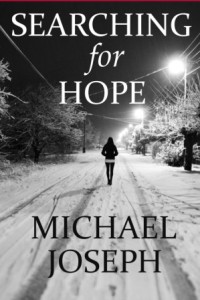 On a bitter January night, private detective Sam Carlisle steps out of a nightclub and stumbles across a severely wounded man prostrate on the freezing ground. Despite Sam’s efforts to save him, the stranger dies in his arms, uttering three small words before taking his final breath.

In the days that follow, the tragic encounter plays increasingly on Sam’s mind. Who was the victim? What was he trying to find? With the police investigation drawing a total blank, Sam searches for the truth himself, determined to carry out the dead man’s cryptic final request. However, following in the footsteps of a murdered man brings plenty of danger of its own.

Searching For Hope is the latest mystery featuring former undercover cop Sam Carlisle as he finds himself drawn into a perilous world of unscrupulous characters, dark secrets and a family torn apart by tragedy and betrayal.

Searching for Hope is available from Amazon.com and Amazon UK.

Exclusive excerpt from Searching for Hope by Michael Joseph

Sam was only feet away from the stairs now. Diego’s one-man act had bought him the time to get there. Now he just had to-

Sam’s foot struck something. He watched in horror as a stone went scuttling across the concrete floor, echoing loudly around the empty building. Sam cursed himself. He had blown it.

Sure enough, he heard movement from down below. Alerted by the noise, the eavesdropper was beating a hasty retreat. Sam ran to the top of the stairway and launched himself down the steps, taking them two at a time. Halfway down, he got a fleeting glimpse of a blue hooded jacket disappearing from view. The figure looked familiar to Sam.

Sam had to catch up. Instinctively, he took a huge leap, deciding to miss out the remaining steps to save time. He landed heavily at the bottom and felt his ankle jar on impact. Ignoring the pain, Sam tried to continue his pursuit, but his ankle gave way immediately. Sam swore in frustration and looked down accusingly at his foot.

A screwed up piece of card on the ground caught his eye. Sam bent down and picked it up.

Sam raised his eyebrows and tucked the ticket into his back pocket.

Gritting his teeth, he set off again, more in hope now than expectation. He hobbled out of the building and immediately found himself buffeted by a strong wind. He was on the same stretch of land he had visited last night. Today, the scene was deserted.

Apart from a hooded figure going into the building opposite.

Jake, slowing down, out of shape and running out of breath.

Sam grinned in satisfaction. Ignoring his throbbing ankle, he followed in Jake’s tracks, relishing the opportunity to catch up with the man who had smashed his window last night. And not only that. Jake had lied about knowing Danny, and now Sam had caught him spying on Diego and himself.

Sam followed Jake into the building, realising it was the same one he and Clarence had talked in yesterday. He came to a halt in the first room he entered. Presumably, it had been a reception area in the factory’s heyday. A lengthy counter ran along the far wall. A defunct clock still hung precariously on the adjoining wall. Two exits ran off from the room. Both had their doors missing.

Sam looked down at the dusty floor. Fresh footprints led to the doorway on the left. Sam nodded grimly and went that way. Last night, he had followed Clarence through the other door, a route that had taken them into the main factory area. This time, Sam found himself in a small room, windowless and musty. Empty boxes littered the floor. The footprints carried on across the room, ending at a closed fire exit door. Encouraged by the thought Jake was struggling to maintain his pace on the other side of the door, Sam headed for it.

He heard a noise behind him.

Sam turned, but he was too slow.

Something struck him hard on the back of his head, sending him falling. He hit the ground with force, sending pain shooting up his leg. Spread-eagled on the floor, the room began to spin, the walls flashing by him at speed. Sam closed his eyes and opened them again. No change. He couldn’t get anything into focus. He groaned as fresh pain began to roar through his skull.

Sam heard someone cackle nearby. It was an evil sound, harsh and unsympathetic. Sam knew he was in trouble. He had to move.

With supreme effort, he rolled over onto his back. Through blurred vision, he made out a form standing over him, wielding an object high in the air, preparing to bring it down. Sam tried to get up off the floor but it was useless. The energy had been knocked out of him. He couldn’t see straight. The combined pain in his leg and skull was excruciating.

Sam closed his eyes and awaited the inevitable with a strange kind of detachment.

After all these years.

All the narrow escapes.

This was how it was going to end. In a dark, dank room, at the hands of a drunken maniac.

He thought of his wife.

Sam had missed them so much.

He was looking forward to seeing them again.