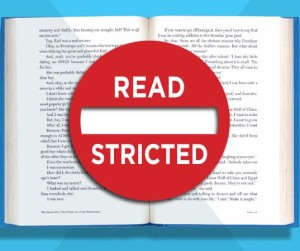 One day my fourth-grade teacher peered into my desk, where I’d stashed a copy of a popular and slightly controversial novel I’d borrowed from my mother, to entertain myself with during free period. Mrs. Prusak wasn’t amused. She pulled me into the hall and asked, “Do your parents know you’re reading that?”

The thought had never occurred to me. Books were ubiquitous in my house. I was an early reader, and I picked up whatever was sitting around. It never dawned on me that I had to ask permission. I just made sure I kept my mom’s bookmark in the right place.

My parents were apparently fine with my literary choices, and Mrs. P backed down. But if the school or the library or someone else’s parents decided that there were certain books I wasn’t allowed to read, I would have been furious.

Just the thought of that possibility still makes me shudder. That’s one of the reasons I’m such a big fan of Banned Books Week, the annual celebration of our freedom to read.

This year, the now-international event will run from September 27 through October 3, and libraries, schools, bookstores, and entire communities are planning a slew of events ranging from virtual read-outs to public discussions of books and more.

This year’s theme is young adult fiction, which is particularly appropriate because most ban or challenge attempts are made against books targeted for teens, often in the guise of “protecting” them.

According to Judith Platt, chair of the Banned Books Week National Committee, “These are the books that speak most immediately to young people, dealing with many of the difficult issues that arise in their own lives, or in the lives of their friends. These are the books that give young readers the ability to safely explore the sometimes scary real world. This Banned Books Week is a call to action, to remind everyone that young people need to be allowed the freedom to read widely, to read books that are relevant for them, and to be able to make their own reading choices.”

Heading up the list of 2014’s most frequently challenged/banned books is a multiple award-winning young-adult book by Sherman Alexie, The Absolutely True Diary of a Part-Time Indian. In fact, of the top-ten most-challenged books, six are YA titles, according to the American Library Association.

I like to read a book (sometimes more) from the banned list during September, and this year, I chose Alexie’s. It’s brilliant, especially the way he uses humor to stick a pin in gut-wrenching subjects like racism, bullying, alcoholism, and domestic abuse. I’d understand why some parents might bristle at the thought of their children reading it. They have the right, as guardians, to see to the education of their children, but I don’t believe it gives them the right to make decisions for the entire community. Because when a ban or a challenge is issued, it goes deeper than simply an expression of opinion — it’s an attempt to have access to that work restricted. And that’s censorship.

If you’d like to pick up my “read a banned book challenge,” here are the top ten most frequently challenged books of 2014, and why they were cited.

If you’d like to learn more about Banned Books Week and events in your area, or start one of your own, visit their new website: http://www.bannedbooksweek.org/.

20 thoughts on “Read a Banned Book”