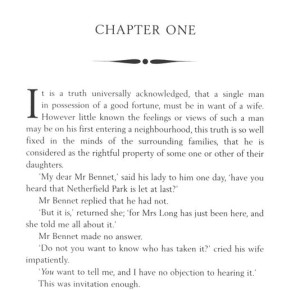 Isn’t it odd how you never particularly notice something that’s a fairly regular occurrence, then suddenly you start to pay special attention to it and even question its purpose? Chapter titles are one of those things.

A book I read recently was a mammoth editing disaster. (Unfortunate, because the writing was actually quite promising and the story not half bad.) But it’s when you’re stumbling over so many errors that you notice the tiniest thing. In this particular novel, amongst many other blunders, the chapter titles were rather random: sometimes there was one (I’m referring to more than just the number of the chapter, i.e. ‘Chapter One’), and sometimes there wasn’t. Considerably irked by the general editing standard, this further lack of consistency needled me even more. However, it got me thinking and then realising that I never really take any notice at all of chapter titles. As far as I’m concerned, it’s a scene break or change of POV, and Chapter One/Two/Three is perfectly adequate. Cryptic titles, I think, are meaningless, unnecessary … and forgettable after the first couple of lines of the chapter. (I am of course talking merely about fiction books.)

That said, I believe there are some instances where the chapter needs some sort of identification beyond its number:

Where chapter titles are warranted, however, I’m not so sure a pride-of-place centred heading is required: a side heading would, I think, suffice, as it would still be picked up in the formatting for a TOC and, therefore, still be useful for swift navigation around the novel, if required.

Precedence doesn’t supply much of a pattern, either. Charles Dickens didn’t title all of his books’ chapters. Jane Austen didn’t title any. Interestingly, I picked a dozen books from my bookshelf to see how many of them had titled chapters. The selection included books printed nearly a century ago right up to more recent ones. It was a fifty-fifty result.

27 thoughts on “Chapter titles…do we need them?”