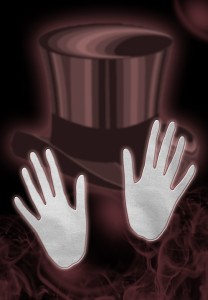 One thing I think most of us writers aspire to is being able to surprise our readers. After all, if the reader knows from page one what the outcome will be — boy gets the girl and they live happily ever after — that doesn’t make for a terribly interesting or suspenseful book. On the other hand, I believe we owe it to our readers to not blindside them. What I mean by that is throwing in a curve ball that has no relation to anything else in the book. Somewhere in there is a happy medium where the reader can be surprised, shocked, maybe delighted by the twists in the plot, but when they think back, they can see the germination of that plot twist. It was there all the time, just under the radar. It fits and it makes sense.

I’ve noticed there are two ways to do this. I call the first one redirection. A classic example of this in my mind is a scene out of the movie The Sixth Sense (okay, not a book, but a story nonetheless). There’s a scene where little Haley Joel Osment attends the funeral reception of a young girl who recently died. He wanders the house and finally goes inside the girl’s play fort made of sheets, and the sheets are held together by clothespins above his head. We know he’s about to encounter the ghost of the girl; that’s a no-brainer. But when the music gets tense, suddenly the clothespins start popping off the sheets, and as the gap widens more and more with every pop, we know the girl is going to appear there above Haley. We know. And we know so fully and so viscerally that when the girl appears inside the tent, not two feet away, it scares the crap out of us.

Redirection in action. The director purposely focused our attention on the popping pins and the gap they revealed, leading us to believe the action would be there, then he slid the ghost girl in right under our noses, right in our faces. Yikes! The interesting thing about this is that we knew what was going to happen (girl appear), we fully expected it, and yet it happened in a way different from what we were expecting, and therein lies the shock. Classic.

Almost the direct opposite of redirection is what I will call desensitization. For this, I’ll use my favorite book on the planet, A Prayer for Owen Meany. Owen Meany is an unusual coming-of-age story about two boys growing up. The central theme of their early years concerns the fact that Owen Meany killed Johnny Wheelwright’s mother with a foul ball hit during a baseball game. (No spoilers here; that’s discussed in the first few pages of the book.) Much of their pre-teen and teen years are spent dealing with this tragic turn of events, and they do that in a variety of ways. One thing they like to do is play basketball (baseball has lost its allure for them), and they practice what they call “the shot.” This is a choreographed play in which Johnny passes the ball to Owen (who is tiny), Owen dribbles up to where Johnny is waiting beneath the basket, then leaps up into the air, Johnny catches him and leaps up even higher with him so Owen can stuff the ball in the basket. They practice this over and over in the book, to the point that it just becomes white noise amid all the other events through the years. We know what they do; we know how they do it; we know how long it takes them (four seconds). But it is only after years of soul-searching and growing up and finding their way in the world that this “shot” comes back into play at the tragic end of the book. This is a case where we were extremely familiar with this exercise, but the surprise comes in the way it works into the end.

In my most recent novel (not yet released), I used redirection more than once. I had a couple parts in the book where things turned very serious, tragic even, and I did not want to telegraph that. Instead, the events leading up to these turning points were lighthearted and hopeful. The possibility of tragedy was there, but it only lurked off in a corner; it wasn’t center stage. My hope was that the optimistic lead-up was plausible enough to catch readers off guard, yet the tragic turn of events wasn’t unrealistic. From the comments I’m getting from beta-readers, I do believe it works.

The second aspect of this redirection is that, from that point on, the readers know they can’t entirely depend on me to telegraph the plot twists, nor can they trust their own wishful thinking. I think the first redirect sets the stage for the readers, so they understand that unexpected things can, and will, happen. To my mind, this heightens the sense of tension in the readers, and leads them inexorably on because they can’t be sure they know how the story is going to go. I’d call that the definition of a page-turner.

What about you? What devices have you used to surprise your readers?  I’m sure there are more than just the two I’ve covered here; I’d love to hear about others. I would especially like to hear from mystery writers, since that’s a genre I’ve not strayed into (yet). What methods do you use to introduce your cast of suspects, and then how do you keep the reader from guessing whodunit?

9 thoughts on “Writing Sleight of Hand”