This week, Smashwords issued an email announcing a new feature: Presales. It’s a special, patent-pending feature available to authors who have books on pre-order. Here’s what the email had to say:

Wouldn’t it be cool if you could provide your most loyal readers the ability to purchase and read your next book before the general public?

And wouldn’t it be cool if ebook retailers gave readers the option to sign up for your private newsletter, rather than having your future relationship with the reader mediated by the retailer? END_OF_DOCUMENT_TOKEN_TO_BE_REPLACED

You may recall from my post last month on my disastrous attempt to use the Smashwords preorder feature that I wished Amazon would allow indies to take preorders. Well, the Zon must have been listening to me (she said with no undue modesty whatsoever), because now it does. END_OF_DOCUMENT_TOKEN_TO_BE_REPLACED 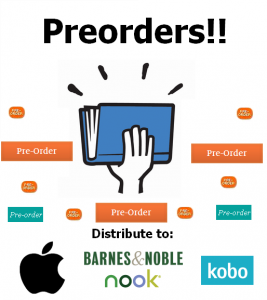 It’s been about a year since Smashwords began beta-testing its preorder feature, and it’s been live for everyone for six months, give or take. Mark Coker was excited enough about rolling out the feature to everyone that he even put together a PowerPoint presentation on leveraging it to your best advantage for your new release.

When I saw that PowerPoint, I got all fired up about using it for the release of Undertow in March. So I did a whole bunch of stuff suggested in the presentation: I uploaded the book file a couple of weeks early, set the introductory price low (99 cents), mentioned the availability of preorders prominently on my blog and Facebook page, stuck the info in a newsletter, and sat back and waited to hit the big-time on release day. END_OF_DOCUMENT_TOKEN_TO_BE_REPLACED

When I heard that Kobo was gearing up to let authors upload books on preorder status, I didn’t know that Smashwords would soon be leading the charge on most of its premium channel distributors.

Yes, Mark Coker and company are now offering preorders, but in a public beta test. The big news is that you don’t have to be James Patterson’s staff of assistants or Hugh Howey to make your next book available for preordering. END_OF_DOCUMENT_TOKEN_TO_BE_REPLACED