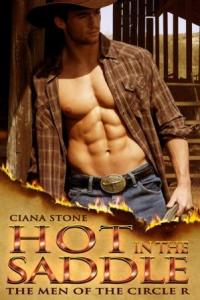 Hot in the Saddle
by Ciana Stone
Genre: Romance/Western
165,668 words

Four ranchers as hot as the Arizona desert – men more than willing for a night of loving, but who all think that love is not in their cards. Four men, four stories.

Chase’n’Ana: Chase Hawks had a good handle on life. Then fate intervened. He ran over a woman. Literally. Hit her with his truck. So, what what happens when a down-to-earth rancher hooks up with a quirky new age witch who likes to dance naked under the moon?

Molding Clay: Clay Russell had plans, big plans. But his family had other plans. They roped him into taking on the job of getting a struggling ranch back on its feet. He didn’t expect it to be something beyond his ability. He also didn’t expect Rusty Blackhawk to be a woman. Or a witch.

Scout’n’Cole: Cole had no trouble attracting women. He just wasn’t expecting to find love. Then he’s teamed up with Scout Windrider and everything changes. Faced with a murderous madman, Scout and Cole take a leap and discover something relegated to myth and legend is not only true, but will change them forever.

Conn’n’Caleb: Single and loving it! That’s Caleb. Life’s good — although a little predictable. Until a woman drops out of the sky and into his kayak, nearly drowning him in the process. But getting wet is the least of his problems because Conn isn’t like any woman he’s ever known.

Hot in the Saddle is available at Amazon.com and Amazon UK.

END_OF_DOCUMENT_TOKEN_TO_BE_REPLACED 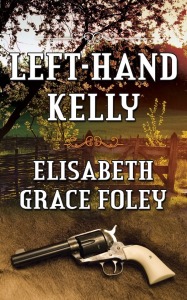 Sixteen-year-old Lew Kelly grew up idolizing his enigmatic ex-gunfighter father. Everyone thought Lew’s habit of practicing his quick draw was a harmless amusement — until the day when a boys’ hot-headed quarrel exploded into gunplay, with disastrous results.

Three years later, Lew is withdrawn and bitter — and he still carries a gun. When an unexpected twist of circumstances forces him to again face the memories and the aftermath of that ill-fated fight, will old wrongs be righted — or will the result be an even worse tragedy than before?

Left-Hand Kelly is available at Amazon US and Amazon UK. END_OF_DOCUMENT_TOKEN_TO_BE_REPLACED

The man came into the border town at dawn.  He sat tall in his saddle, and he was a tall man.  A handful of inches over six feet, but slim and wiry.  He was some dirty, and a week’s worth of stubble smudged his rawboned face.  Behind him, the desert heat was building and the red sun was rising like a phoenix.  It had been a hard ride, but Thane Johnson was a man used to hardship.