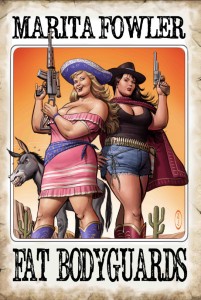 Today we have a sneak peek from the humorous novel by Marita Fowler: Fat Bodyguards.

Saucy calzones Shasta and Ulyssa have earned an honorary spot in the mafia with their wetwork, but the girls are ready to leave the crazy mob life behind and return to Nitro. They’ve got one foot out the door when a desperate Nicolo makes them an offer they can’t refuse. A fat paycheck to take his daughter on a vacation far, far away from New Jersey. Paranoia fueled situations keep the girls on their toes, but they’re caught flatfooted when attackers kidnap Princess and disappear without a trace. The only thing worse than guarding Nicolo’s daughter…is losing her. Armed with plastic guns and southern charm, they set out on the most perilous adventure of their lives.

This book is available on Amazon, Amazon UK, Barnes and Noble, and other online retailers.

And now, an excerpt from Fat Bodyguards…

END_OF_DOCUMENT_TOKEN_TO_BE_REPLACED

Two archaeologists, a priest and his best friend, uncover a bizarre map that leads to the Biblical burial cave of Abraham, drawn by a famous first century Rabbi. The two friends must decipher the strange symbols on the map to locate the cave, and secure what may be hidden there before antiquity thieves catch up with them. What they encounter in the cave changes their lives and the lives of all mankind, forever.

The Garden of Souls, the action-adventure novel by Cheri Vause, is available from Amazon US and Amazon UK.

Spoken English
Around the world, spoken English can sound very different; hell, even in the same country it can sound, to the casual listener, like a different language. This difference can sometimes lead to misunderstanding and difficulty in communication; however, not so long ago (certainly in my lifetime), there was very much more diversity within the spoken English language.

Brought up in the UK, I listened to the different American accents in various US television shows and films with fascination, and could identify several New York dialects, the New England inflection, the drawl of the southern states, and all very different from a west coast accent. I was a Scottish miner’s brat, who’d never met an American; the power of talking pictures.

Whilst in Scotland I was able to tell what village someone came from by their accent. After moving to a new mining community in England, I came into contact with miners’ families from all over the UK; so many different accents: Wales, Ireland (Ulster & Eire) and the Northern and Southern counties of England; a multitude of different accents. END_OF_DOCUMENT_TOKEN_TO_BE_REPLACED