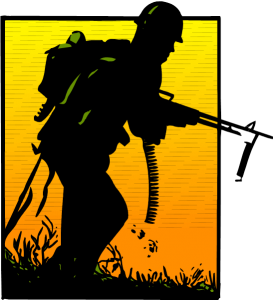 In the last post we covered military service uniforms. Now it’s on to the shoot ’em up bang side of warfare: small arms. Man has been waging war for thousands of years. In the beginning it was with rocks and sticks. Over time it has become a race between countries and cultures to perfect instruments of death.

Why is it important to know something about firearms? Well, if you’re writing a period piece, oh let’s say about the American Civil War, you don’t want your Johnny Rebs engaging the Union troops with M4 carbines. That might work if you were doing a time-shifting/time travel story. A platoon of Confederate soldiers armed with modern rifles would lay waste to an entire company of Union soldiers. You could, in effect, change the course of history with that scenario.

But let’s keep this simple and historical.

The first “gun” was fashioned in China in the 13th century. It was nothing more than a bamboo pipe filled with black powder with handfuls of rocks, metal, or other debris shoved down and fired at the enemy. It was crude, dangerous, and probably quite inaccurate. Over the next several hundred years, the firearm was refined and evolved to what we know it as today.

In the eighteenth century firearms mostly consisted of smooth-bore muzzle-loading flintlock muskets such as the Brown Bess and the early Kentucky Rifle. The average time for a soldier to reload after firing a volley was approximately thirty seconds. A good soldier could manage 2-4 shots a minute. Pistols were highly inaccurate at this time and only useful at close distance. With questionable accuracy and difficult reloading, it’s a small wonder that America somehow managed to win her independence from England with these crude weapons.

Here’s a fun little video on reloading a Brown Bess:

As America moved into the twentieth century, and a new war, WW I; it saw a revelation in the firearm in several ways. Improvements made during the Civil War created the rifled barrel, thus increasing distance and accuracy. Metallic cartridges made it possible to reload in a fraction of the time it took with a muzzle-loader. Now soldiers could fire 10-15 rounds a minute. Greater additions were bolt-action and magazine-type rifles that were the predecessors of today’s modern sporting rifles. The Springfield 1903 rifle was one leap into the future of firearms. With a range of 1,000 yards, the 1903 was considered one of the best rifles of its time.

Pistols were evolving from the revolvers used in the Wild West to semi-automatic magazine-fed ones capable of holding twice as many rounds of ammunition. This era also saw the first machine gun: the Maxim. With a 500 round per minute rate of fire, it was devastating on the battlefield.

World War II ushered in even more destructive weapons. America realized the dependable Springfield wasn’t capable of handling the rigors of a new battlefield and created the M1 Garand: a semi-automatic rifle that held eight rounds of 30-06 ammunition in metal clips which could be inserted quickly into the rifle. The M1 carbine was a scaled down version of the Garand and was used by officers and paratroopers because of its smaller size.

Handguns were improving at a slower rate. The very dependable semi-automatic Springfield 1911 pistol was a favorite in WW I and used in WW II by officers and enlisted. Being .45 caliber, it possessed excellent knock-down power. It is still used by some U.S. forces today. However, the standard sidearm for the U.S. is the Beretta M9. It uses a smaller 9mm NATO round and is preferred because it has less recoil than the .45.

Other weapons that made appearances in WW II were shotguns, the famous Thompson sub-machine gun (the Tommy gun), and even some personal hunting rifles were employed by snipers.

The Korean War saw little change in U.S. small arms. It wasn’t until Vietnam that a new rifle was called for. The year 1963 brought the M-16 rifle to the jungles of Vietnam. It was far lighter than the M1, had a 30 round magazine, and was capable of firing 700-900 rounds a minute. It gave U.S. soldiers more firepower against the Vietnamese, who were fielding the already battle proven Russian AK 47 assault rifle.

The M-16 has had a long service life with the U.S. military. Over the years, several variants have come out. It is worth doing research to ensure your characters are using the correct version of the rifle for the timeframe of your story.

The rifle also has areas for attaching accessories—such as laser sights, scopes, flashlights, grenade launchers, etc. All these goodies can drastically increase the weight and functionality of the rifle, it’s best to keep it fairly simple for the sake of your readers and characters.

Warfare has definitely changed over the centuries. It’s gone from crude bamboo pole rifles to state of the art pieces of killing equipment. In the next installment of this series we’ll discuss some of the more important military vehicles that have been employed in battle. Without a way to get to the battlefield, and protect yourself while on it, you’re just a sitting duck.

4 thoughts on “Getting it Right: Military Small Arms”