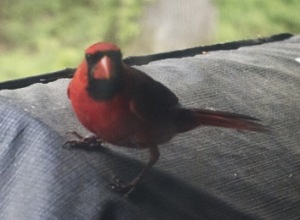 Some of you might know that for what seems like the last three months, a male cardinal has been smashing into my kitchen windows. Repeatedly. When he’s not hurling his tiny body against the glass, he’s staring up at us, glowering, as if we should do something about his problem. Or at least make him some coffee. We have named him Napoleon. I’ve tried every remedy friends have suggested to get him to stop doing this, but every morning there he goes, flinging his little body at his own reflection, thinking it’s an intruder threatening his domestic bliss with Mrs. Napoleon. Since he doesn’t seem to be going away, I figure that perhaps he’s here to teach me a few things, such as:

1. Persistence is noble, but keep the goal in mind. If you forget why you’re blasting out your message, if you lose sight of who you’re trying to reach and why, you might as well keep throwing your tiny, feathered body at a window. And that’s gotta hurt.

3. There’s a time to move on. The bird’s reflection in the window isn’t going anywhere. The reflection won’t stop fighting back. I can cut Napoleon some slack; his brain is very small and is acting on instinct. I can’t give you the same pass if you’ve been bombarding the world with the same sales message about the same book for the last five years. For all that is good and holy, find something else to do. Write another book. Offer to help other writers by beta reading. Or join Napoleon and find another window. We have lots.

4. You can only fight the same battles for so long. Eventually, everyone in your social media groups will know your stand on Oxford commas, Garamond versus Palatino, and the proper size of gutter margins. Give it up and let’s talk about more important things. Like coffee. And the new pictures I have of the bird that keeps crashing into my window.

5. Other authors aren’t out to get you. Yes, the red bird in the window is scowling at you. Yes, he looks threatening. He’s selling more books than you are, most likely, and he’s probably dating a supermodel. But like the reflection, he’s on his own path, his own plane. You’re on yours. The “threat” is mainly in your imagination. His success does not diminish or prevent yours. All that your bluster and jealously does is waste the energy you could be spending knocking into windows that might someday open. But if Napoleon gets a book deal, I demand a percentage.