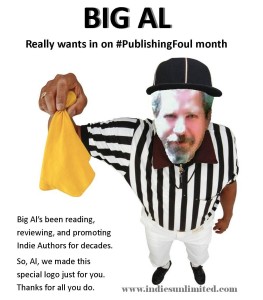 This week I’m supposed to reveal the results of the survey we ran last month on the book production processes used by our readers. It was a lot of work, so I’m going to milk the survey for as many posts as I can. But we also have a theme for this month, focusing on “publishing fouls.” Guests and minions alike have been providing stories and hints on how to recognize and avoid being victimized by those in the publishing world who prey on eager neophyte authors.

I could tell the story of the book my mother self-published more than twenty years ago. At the time I was vaguely aware of vanity publishers, although I have no idea how. I was concerned someone would take advantage of her, but she’d done her research, knew the pitfalls, what her goals were, and made all the right decisions. Of course, the fact that my dad is so cheap (he’d claim the word is thrifty) and she was dependent on him to bankroll this, would mean any vanity publisher was going to be wasting their time with her.

But I really wanted to fit the theme. (Disclaimer: The advantage of fitting the theme is I get to use that nifty little referee picture so I don’t have to search out a graphic for my post. That’s well worth a little extra effort to find a way.) Historically, one of the ways vanity publishers have preyed on authors is by charging outrageous fees for services. But if you listen to the advice of many self-publishers, it will be suggested that some of the things that need to be done in the publishing process can and, depending on your skill set, maybe even should be, hired out. So how is a newbie who lacks confidence in the publishing process beyond their writing skills going to proceed? If he or she wants to hire out all of the non-writing tasks, what is considered a good offer from a company that says “we can do it all?” What’s the difference in price between a typical indie’s costs and one of the predators, lying in wait for their next victim? In the last part of this post, using the survey responses, I’ll attempt to establish a range that might be reasonable. If you see a referee somewhere on the page, you’ll know my ploy worked.

How accurate and reliable a survey is depends on several factors. These include the sample size, the population the survey draws from, and any bias in the questions asked. It is easy for those reporting a survey’s results to make claims for what it shows that don’t hold up to scrutiny and it isn’t uncommon for others looking at the results to extrapolate what the survey indicates far beyond what it actually proves. So I’m going to tackle these items up front and however many posts I manage to milk out of this thing, each will be linked back here as a reminder.

Although the survey received more promotion than the average IU post and over a longer period of time, we should assume that the typical respondent is close to the typical IU reader. Even more specifically, the typical IU reader who is an author (I’m out), and who has self-published at least one book (since that was a prerequisite to participate). Readers who drop in to check out the books we spotlight, traditionally published authors researching self publishing, and writers in the process of writing or publishing their first book are IU readers who wouldn’t be included. Authors who tried self publishing and gave up are unlikely to have participated as are those who feel they’re far enough on their self-publishing journey to be beyond needing what IU has to offer (even though we offer such a wide variety of articles that they should still be visiting *cough*). I’m sure you could list other categories of author who aren’t represented. Extrapolating the experiences and processes of the average IU reader to a larger population would be reading too much into the results. For example, if the average respondent has published three books, that might tell us that the average self-published author who reads IU has had three books published. (Actually it tells us the average IU reader who decided to fill out the survey has had three books published.) It definitely doesn’t mean the average self-published author has published three books.

Our sample size (the number who responded) was ninety. I’ll avoid the minutia, other than saying on any numbers I give as a percent, we can be 95% confident that for the population surveyed (remember, IU readers), the results are plus or minus 10%. The numbers will be generally indicative, but far from precise. However, for the primary purpose of the survey, which is to get an idea of the range of processes used by IU readers in getting their books published and secondarily, an idea of the range of costs and revenue our readers see in the process, I think we’ll still see some value from the results.

Last, we’ve got the issue of biased questions. I didn’t attempt to introduce bias. I don’t think any of the preliminary material or questions do. However, in an effort to inject a little humor where it didn’t belong (one of my faults I like to think of as endearing), one of the potential answers to two questions reflected my opinion of the answer. There is the potential that might have pushed someone who would have picked that answer to reconsider. I’m tempted to link to the survey page and suggest you figure it out. Instead, I’ll tell you that it was the answer “I know English, I did it myself,” in response to how an author accomplished copyediting and proofreading. So whatever I eventually say about the answers to those questions, you’ll want to take with several more grains of salt than you might otherwise. Feel free to point out any other issues you see with the questions and potential answers. The link is above and I won’t be collecting additional survey answers, so you can play with it to your heart’s content.

Finally, the end of the nerd talk

You skipped all of that, didn’t you? Go back and read it NOW. Skimming doesn’t count.

I promised more at the top, so here it is. Indies produce their books using a wide variety of processes with vastly different cost structures. (I know, you’re saying duh. I’ll give you more.) Some of the indies who responded put their last book out with little or no cost. 8 of the 90 respondents didn’t spend a dime on hiring editors, cover designers (or stock art for their cover), formatting or proofreading. Half of those spent some money on other production costs, but with one exception the costs were minimal.

How did they do it? Through a combination of doing it themselves, trading services with someone else, and using volunteers (friends and family with the needed skills or beta readers). While I have opinions (see the discussion of biases above), only you and the market can decide which things you can do adequately on your own. None of the respondents reported not using any help at all, at a minimum getting feedback from beta or first readers. It is clear that there are indies who publish their books with very little financial investment.

However, most of those completing the survey had some costs. For now, I’m only going to discuss total production cost. Each question about cost gave several ranges of costs to pick from with zero as an option and a final high option that had no upper limit. The method I used to estimate the total cost was to assign an estimate at the exact midpoint of the range chosen. (For example, if the range was $50.01 to $100.00, I estimated the actual cost was $75.00.) For the ranges with no upper limit, I used an arbitrary estimate of the lower bounds of the range plus 20%. This could be too high or it could be a drastic understatement of the actual cost. However, very few authors answered with the highest value choice, so for the purposes of estimating an average and a reasonable range, this should give us a good feel.

I’ve already mentioned that some authors produced their last book at no cost. The highest reported cost (using the methodology above) was $6775 with all but four coming in at less than $3,000. The average production costs across all of those taking the survey was about $785.

In future posts we’ll delve deeper into the processes used and where the costs varied as well as whatever other information we can glean from the data.

15 thoughts on “And the Publishing Process Survey Says: Part 1”