French explained that the phrase “crime scene investigation” coupled with what people see on the TV show of the same name has led a touch of confusion about what CSI do. In Baltimore City, as well as many other municipalities, the CSI staff aren’t police officers. They’re civilians who work for the police department. As such, they don’t interview witnesses, canvas the neighborhoods, or generally investigate the crime. Detectives and officers do that kind of work. While CSI folks are investigators of a sort, they are tasked with investigating only the scene and the clues it has to offer.

French said that CSI staff document and collect evidence at the scene so detectives can figure out what happened. “The first thing we do is document the scene by taking photographs.” Back when French began working crime scenes in the 1970s, they used 120-roll film to make 4x 6 prints. Up until March of this year (2015), Baltimore used 35mm film cameras to photograph crime scenes. French added that the department took a long time to switch to digital because they wanted jurors to feel confident in the evidence. “There was a time when you said ‘digital,’ the jury would start to wonder if we did something to it,” he explained.

However, the world of digital is gloriously high-tech. “We are rapidly entering an era where it will make what you see on CSI [the TV show] look old-fashioned. There’s a laser scanner that scans the entire room in 360,” French said. “You do a number of scans and then it stitches the scans together so you can do a three-dimensional walk-through of the crime scene.”

In the near future, French suggests, “Juries, instead of looking at photos, can wear virtual reality goggles and be able to walk through the crime scenes.”

When authors and lay-people think of crime scenes, they often think that police are solely trying to figure out who did it. And while that’s the ultimate goal, in order for police to figure this out, they need to know one essential piece of information: who was at the crime scene. This is where CSI comes in. “A lot of what we do is identifying people involved in the crime,” French said.

For example, French said if someone is shot in the street on Baltimore, there’s a decent likelihood that some of the witnesses will simply leave the scene. They’re either concerned about being shot or don’t want to be questioned by police. When the crime scene unit arrives, they might only find a dead body and a bunch of trash and debris. Well, that trash isn’t all useless. The crime scene unit will collect it and try to use it to determine who was at the scene.

Usually, they’ll do this through fingerprint or DNA evidence. Once the crime scene unit has found some people who were at the scene, detectives can go interview those people. “They’ll say. You were there. Do you want to be a defendant or a witness?” French said. “Even if the person doesn’t end up testifying, he can provide the detectives with new leads so they can gather other evidence.”

When French was asked whether witnesses could be forced to testify via subpoena, he noted they could, but that it generally wasn’t a good idea. “Once they’re on the stand, they can just say, ‘I don’t remember’ or ‘I’m not sure.’” So cops often look to witnesses to help them get a clearer picture of what happened, so they can collect more concrete physical proof, as not all witnesses will be useful in court.

So, what kind of physical proof do crime scene folks dig up? Generally: firearms, fingerprints, and DNA. 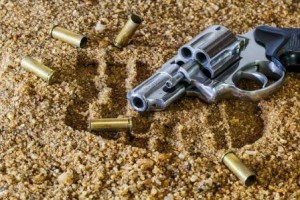 The key firearms information they gather comes from the cartridge left at the scene. For those unfamiliar with firearms, French explained that bullets have three parts: the cartridge (which is the sharp pointy metallic thing you see in movies when good/bad guys load their guns), the gun powder and primer powder, and the bullet.

When an automatic or semi-automatic weapon is fired, the hammer strikes the cartridge, leaving an imprint in it, the gun/primer powder explode, the bullet is fired toward its target and the cartridge is ejected from the gun to land on the floor.

From the empty cartridges, forensic types can tell (based on the hammer strike) the type of gun that fired the bullet. The barrel of a gun has grooves in it called “rifling” that cause the bullet to spin, “similar to the spiral of a football,” French said. Those rifling lines are unique and imprint on the bullet. If police recover a bullet in good condition, it has rifling lines and they can match it to the gun that fired it. Sometimes, though, a bullet is demolished so it cannot be linked to the gun. What would cause a bullet to be in bad condition? Hitting a hard target, French said. Hard targets include brick walls, car doors, metal and concrete barriers. Soft targets include human flesh (lucky for your fictional murder victim), so a bullet pulled from a victim should be in good shape.

However, bullets, depending on the gun, vary in size and weight, so a smaller bullet, such as something from a .22 caliber weapon, might not be as helpful. “Cartridge cases are much better evidence than bullets,” French said.

French noted that revolvers and shot guns, unlike automatic and semi-automatic weapons, keep cartridge cases in the weapon after they’re fired, and have to be manually removed. So, if your gunman doesn’t want to leave cartridge evidence, he can use a revolver or pick up their cartridges. French said, in his experience criminals tend not to pick up their cartridges in order to stymie evidence collection. “In real life, criminals are lazy,” he said. “If they weren’t lazy, they wouldn’t be criminals.”

Old Perry Mason episodes made much of gunpowder residue on people’s hands. In real life, however, gunpowder residue (GSR) is rarely usable. Problem one — if it’s been more than three hours since the crime has been committed, you’re not likely to get gun powder residue. So, you basically have to catch the criminal a very short while after he’s shot the gun. Problem two — gunpowder is easy to wash off. A quick wash and it’s gone. But, let’s say police catch a man fleeing from the vicinity of the gunshot victim. Police officers carry kits with sterile bags, and if they think they have a person who might have fired the gun, they wrap the sterile bag around the suspect’s hand and tie it off at the wrist. This will prevent the residue from being washed off, and police can call a forensic person to come and swab for GSR. In-service officers are not allowed to swab because they carry a service weapon and might have fired it, and their own gunpowder residue could contaminate any swab.

Beyond weaponry, crime scene people deal with evidence such as fingerprints and DNA. We’ll discuss what French said about that in part 2 of this article. You can learn more about French on his Amazon page.