Part 1 of this article offered French’s suggestions on documenting the crime scene and what firearms evidence left there could reveal. In part two, we look at how fingerprint and DNA evidence are used by crime scene investigation units.

French, who’s worked crime scenes for more than three decades, said there’s something called the Locards Exchange Principle, which, in a nutshell, says every contact leaves a trace. If a person goes to a place, they either leave something of themselves at the place or take something with them, or both.

In one case, French said, a man in a car spotted an enemy in the passenger seat of the car beside him. The perpetrator rolled down his window and shot through the raised window of the other car. Glass from the victim’s car shattered into the perpetrator’s car. In addition to eyewitness testimony, police were able to connect the perpetrator because they found those shattered fragments of glass in the perpetrator’s car. In another case, French said CSI found a broken soda bottle at the scene of a murder. One dogged investigator collected every piece of glass at the scene, glued the bottle back together, but it was missing a few pieces. They linked the eventual suspect to the murder because a piece of the glass from that bottle (one of the missing pieces) was found in his shoe.

While glass and fibers can be transferred to the perpetrator or left behind, the big categories people think about when they think CSI are fingerprints and DNA.

In terms of fingerprints, CSI often look for latent, or invisible, fingerprints left at the scene. You can only leave fingerprints on smooth surfaces, French notes. That’s why there are rarely fingerprints recovered from guns. The handles of most guns have rough surfaces, so people can better grip the weapons. That surface is horrible for leaving fingerprints. Some of the better spots to find fingerprints are glass, car doors, smooth metal surfaces, and painted wood. French said paper and unpainted wood aren’t great sources of fingerprints, but using a chemical can pull prints from those surfaces. 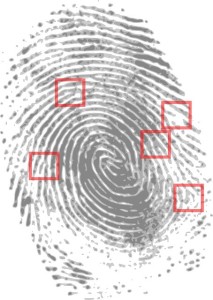 Computer databases make fingerprints much more useful than they’ve ever been in solving crimes. French said the generic term to describe a computer fingerprinting database is AFIS (Automatic Fingerprinting Identification System). French said AFIS systems vary depending on what each department wants access to, but they can be linked to local, state, or federal fingerprint databases. Once a latent fingerprint is discovered and scanned, a computer can run it through an AFIS database to see if there is a match in the system.

A mobile device called VAMPIRE allows police to scan prints at the scene and check them against databases. If you’re wondering why it’s called VAMPIRE, it’s because two red dots (which look similar to vampire bite marks) appear on the screen when scanning prints, French says.

Fingerprints have been used in law enforcement since the 1930s, but DNA evidence, which is more precise, has been a phenomenon of the last two decades. DNA, the unique genetic markers of each individual, can be found on just about anything. In one famous DC murder investigation, police tracked down their suspect using DNA residue on a discarded pizza crust.

“Now, you don’t need a lot of DNA to get a profile. You could swab the lip of this bottle,” French said, holding up the water bottle he was drinking from. “Or swab the nosepiece of a pair of glasses.”

DNA can be useful in putting the suspect at the scene or helping clear them if the DNA doesn’t match. While analysis of DNA and other evidence (such as drug testing) is made easier in the age of computers, it’s not necessarily going to be speedy for all jurisdictions. French noted that Baltimore has its own crime lab, and for an average case, it takes about two weeks to get information. Agencies like the Secret Service, FBI, and State Police have their own labs, too. However, in smaller, rural towns, they’re likely not to have their own lab and have to contract with a private lab or the state police. “[The state police] have their own cases, so unless it’s something really high profile, a small town might have to wait six months for results, or it may be less. It’s really going to depend on where they send it.”

There were just a couple of other items French thought would be useful to authors. First up, he offered the sequence of events for what happens at a crime scene.

French noted that the guy who comes to look for forensic evidence on the body is the medical examiner. “Don’t call them a coroner,” he said.

When CSI collect evidence, there’s one thing you won’t see them do with it. “You don’t put stuff in plastic bags,” French said. “You want stuff to breathe. Always put evidence in a paper bag unless it is likely to drain bodily fluid.” French says they actually have drying racks for stuff that might drain. Once it is fully drained, they’ll then put it in a paper bag.

Another bit of practical information: being alive and then dying is bad (and not just for the obvious reason that someone died). It’s better for investigative purposes if the victim is dead on arrival. If the person is still alive when police arrive, paramedics will try to save him. They’ll take him to the emergency room, where doctors might perform all sorts of invasive procedures to save him. This is bad for investigating what happened. French said medical examiners hate having to deal with patients who’ve received life-saving assistance. It makes it difficult to distinguish what was caused by the assailant and what was caused by the medical team. Also, because saving a life takes precedence with a live victim, paramedics can also contaminate the scene. “Most bloody shoe prints are left by paramedics,” French quipped.

Lastly, French wanted to counter the notion that people get so caught up in the case that they manufacture evidence or lie on the stand. “I’m not going to risk my career or my freedom to falsify evidence,” he said. “I don’t care. I’m just there to present what we found.”

And if he makes a mistake in his collection, he said, he wants to know about it. “Every time [defense attorneys] point out something we do wrong, it makes us better,” he said.

You can learn more about French on his Amazon page.

13 thoughts on “The Skinny on How Investigators Use DNA, Fingerprints in Solving Crimes”