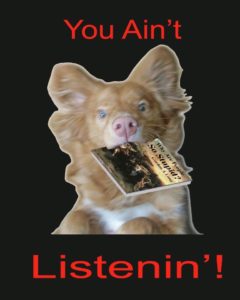 Everyone had so much fun with the last seven complaints I had while reviewing books, I thought I’d give them a chance to get right down to some more. Some are a bit esoteric, but when a reviewer is really busy and looking for an excuse to go on to the next book, a few of these will do the trick every time.

This is feedback from everyone in comments on the earlier post. NEVER, EVER, EVER bore the reader with an Information Dump. I know you need us to know the whole life story of the main character, but we don’t know we need to know it, so why read it? So we put your book down after Page three.

The Ancient Greeks were religious types, and their dramas were part of their religious festivals. It was therefore de rigueur to make sure that whatever god they were worshipping got his due in every play. Consequently, the usual plotline had humans getting into troubles they had no way of getting out of, and the god descending from the heavens on a crane of some sort (god from the machine) and ending the play by solving everyone’s problems.

Readers who live in secular democracies don’t think like that. We believe that humans have the ability to solve our own problems, and we like writers who have the ability to write plots that are solved by their characters. So having the alien spaceship (or the cavalry) show up at the last minute to rescue the hero ranks right up there with telling Mommie when your brother teases you.

This kind of thing happens most often in TV serials, but popular writers like Danielle Steele are far from immune. The character may be the nicest grandmother in the world, but if the plot requires her to suddenly become faithless and mean, then there she goes, bopping Grandpa on the head and running off with the milkman.

You see, we readers know that in real life people change; they turn out not to be what we thought they were. But we’re really suspicious if the author uses that technique to further the plot. Is it just lazy writing? Unless there’s a bit of preparation: just a couple of hints (foreshadowing) about grandma’s secret personality, so we can say, smugly, “Oh, yeah. I saw that coming.”

11. And While We’re Talking about Preparation

“Then he picked up the gun he found lying there…”

Please stop dropping in plot elements out of the blue, just because you happen to need them. Just like the sudden character change or the deus ex machina, you don’t realize how obvious it looks to the reader when the author throws in an element that he suddenly needs because he’s written himself into a corner. Yes, we know you’re the author, it’s your setting and if you want a door in that corner, you can write one in whenever you like. But remember, we also know you cheated.

Gordon’s rule of three: a necessary plot element can only be used on its third appearance. The more crucial the need, the more obvious the previous mentions. This goes for characters as well.

12. Too Many Characters (Especially at the Start).

They say you have to experience a word seven times before it becomes part of your vocabulary. Think about that when you’re adding X&p’th, the third jK’lian warrior, who will now stand around and do nothing for the next thirty pages until he’s needed to save the princess. The reader is just not going to remember him.

Unless you want to confuse your readers completely, start your story with a small number of important characters. Then, as you slowly add the others, give each one his moment in the reader’s regard, with some memorable act to perform, and have people say his name several times.

12A. And while I’m at it, putting apostrophes in names of Fantasy characters went out of style a long time ago. As in, just after it started. The only reason to have an apostrophe is if there’s a letter missing, and you’d better know what that letter was. See Anne McCaffrey’s Dragonrider names if you want to experience the apostrophe used correctly.

Same with all those extra characters that aren’t letters. If you want to call your protagonist @#$%^&, well, that perfectly expresses my opinion of your creative skills.

Part B: Sure Signs of the Absence of an Editor.

These are picky, but when my slush pile is huge and I’m booking reviews 3 months down the road, I get picky. If I see a couple of these errors, I ship the novel back, suggesting the author get the book edited, and then I’d be pleased to look at it.

13A. Never use the word “existential.” Take it from me, you don’t know what it means. I took a graduate seminar on the subject and I’m still not sure. I know what it seems to mean. “Existential” contains the idea “existence.” Thus an existential problem threatens your existence. Wrong. By that thinking, a “perquisite” is something the perks you up, and if vegetarians eat vegetables, then what do humanitarians eat? The English language just ain’t that logical.

If you want to know, “existentialism” used in a literary sense has to do with free will and the individual’s ability to make a moral choice independent of the influence of the rest of the universe. My Theory of Philosophy 501 prof would probably give me a C+ for that one, but it’s a good working model. After all, the philosophers who invented the term couldn’t agree on it either.

So do us all a favour and don’t bother. It doesn’t make your writing any deeper or more important. And for all of us who think we know what it really means, it makes you look pompous. Which we, of course, are not.

13B. Another error made so often that it’s almost become part of the language; please don’t spell “all right” as “alright.” Yes, I know that a lot of people use it, and I’m sure it’s in all sorts of dictionaries and spellcheckers, and I guess using it makes you feel cool and hip and trendy and rebellious. But for a certain percentage of your readership, use of sloppy writing like that is the first symptom of… well… sloppy writing. And when that percentage of the readership includes a lot of reviewers… I mean, is it that hard to learn “all right?”

13C. Using “their” as a singular pronoun, as in “No writer wants their work critiqued so harshly.” Sure, the political-correctness mavens have tossed us a gender-equity curve. But there are ways of dealing with it, and good writers find them. Are you a good writer?

The worst, Worst, WORST mistake that an author can make is not getting the best editor you can afford to keep you from making all the mistakes above, plus your own homegrown set. I know it’s rather difficult to go out and pay good money for someone to tell you that you did it wrong, but that’s part of the professional’s pride as well. Pride in your ability to admit you made mistakes, because you know your work will be better because you fixed them.

And then reviewers will be asking you if they can review your books. Wouldn’t that be nice?

14 thoughts on “The Next Seven Book Reviewer Complaints”