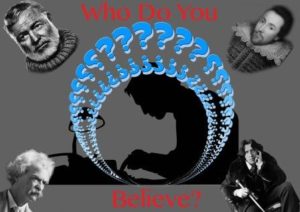 Making a superficial scan of the thousands of bloggers, promoters, DIYers and wannabe gurus on the web, we find tons of tried-and-true wisdom about how to be a writer. Even how to make money at it. Some of that advice needs to be taken with a grain of salt. Some of it with a huge, horse-pasture-sized block of salt. Especially if we have illusions about making money at writing.

What Does Everyone Tell Us?

What we want to hear, of course: that it’s just fine to be self-indulgent. And because that’s what we want to hear, we think, “Oh, that writer is sure smart. I’ll follow that advice.” And away we go, merrily writing books that only our mother and our favourite aunt will really like. We’ll be able to shame a few relatives and friends into buying one and we’ll fool a few innocent online buyers with a catchy title and a professionally designed cover. And then our sales will fall prey to the dreaded Kindle dwindle, and we’ll start thinking about our next book, now that we know what we’re doing.

1. Write What You Know

Be very, very careful with this one. When something is so instinctive to you that it just happens, you have no idea what the average person knows already or has absorbed from what you told them about that activity. Probably very little. And why should they care?

Hence we have the scientists who think they should write Sci-Fi and end up with a fictional textbook full of all the stuff they love. And no story. We have mystery writers who do a Cozy Mystery about a SCUBA diving agency in Hawaii, and get inundated by a plot that revolves around the dissolving rates of nitrogen at different pressures. (I just made that one up. It’s free if you want it. Go ahead. Knock yourself out.)

I’m a fanatic sailboat racer. I’ve forgotten more than most of you ever knew about sailing (and the older I get, the more true this becomes). If I put in a scene full of halyards, jibes, vangs and the splicing of mainbraces, am I going to lose my readers? Probably. I actually risked putting my main character on a racing yacht in the novel I’m publishing this fall, but I kept my enthusiasm in check by making it clear that she knows absolutely nothing about sailboats, let alone racing them. We’ll see how readers respond.

2. Write What You Love to Read

For similar reasons you have to be wary about what you love to read. Do you know why you love it? What if you love a certain genre because of a small part of it that most readers ignore? If you write a book in that genre full of your favourite stuff, other readers won’t be interested.

3. Write It and They Will Come

It sounds good, but for most of us, it ain’t gonna happen. If you write what you want to and disregard your audience, you’re probably going to stay an amateur writer. Amateur writers write for themselves. Pros write for their audience.

If you want to be a professional writer, look at your audience first. Before you put pen to paper, check out what genres made the most money recently. (Gross earnings/Total books available on Amazon = Average sales per book)

If I had been smart at the start, I would have taken up Romance instead of Fantasy. No, actually, if I’d been smart I would have kept my real job, where I was making more in a day than I averaged for the last five years from Amazon sales.

The moral of this story is to do your market research like any other business. Find out what people want before you create something to sell. Advice which very few people follow (including me), which is why artists are traditionally poor. But we have more fun than anybody else.

Which brings us to the final advice:

4. Spend Time on What Makes You Money.

If most of us did that, we wouldn’t be writers at all. Face it, there are far more people in that snake-that-eats-its-tail known as the publishing business making money by helping other people write than there are writers earning a living selling their books.

I’m a good example. I make more money editing, formatting and publishing than I do from Amazon and Smashwords book sales. This spring I followed the above advice because I had a government grant that paid me real money to record and publish a bunch of people’s oral histories. I spent most of my working time and a great deal of my artistic energy on this project. My writing output dropped.

Of course, what suffers when my writing is dropping off is not the fun part (the writing). It’s the promotional stuff, which I’m not that great at. Now I have three of my own books piled up at various stages of release, waiting for me to get my butt in gear and promote them. I should obviously be following my own advice instead of passing it along to you.

However, like all authors, I’m doing what I want to, and not what all the good advice in the world tells me to do. If you want to make money, don’t let the ‘common wisdom’ above persuade you to do the same.

10 thoughts on “4 Bits of Bad Advice for Writers”