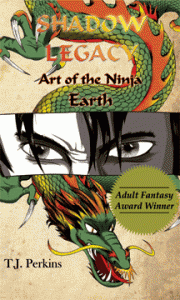 Today we get a sneak peek of author TJ Perkins novel Art of the Ninja, Shadow Legacy:

Growing up ninja in a modern world with ancient customs is difficult, but the Japanese government still has need of them. Training in the Chaio village, home of the best ninja, Duncan Kimura dreams of one day being chosen for the elite special forces–the Black Dragon Squad. But his dreams won’t become a reality if he can’t control his destructive rage that threatens everyone around him.

Faced with a foe unlike any other, Duncan must overcome his own fears and the raging anger bursting within him to save the woman he loves from certain death. Follow him through his trials and challenges as he will either lose himself to his rage and become a threat to all he knows and loves, or triumph and become the ninja his people expect of him.

Shadow Legacy is available on Amazon.com in print and for Kindle.

From Art of the Ninja, Shadow Legacy…

Hikaru had sunk to one knee, holding a hand over the slice across his chest as blood continued to ooze between his fingers. He was losing too much blood. I grabbed his right arm and flung it over my shoulder.

“Dude, that was about fifty guys you just laid out,” he drunkenly smirked.

“That was sooo awesome,” Hikaru muttered then tried to laugh only to wince and clutch his gi.

Distant shouts set my senses on edge and I knew we didn’t have a lot of time to make our escape before more Shimoshuki would surround us.

“On your feet Shinobi!” I shouted at Hikaru jostling him a little, “Now! Get up and move!”

Hikaru raised his head and sobered at the sound of an angry order. He instantly stood and took a few steps.

The next thing I knew he was running next to me and the more we ran the more his head seemed to clear.

I didn’t reply, instead I practically picked him up and bolted through the trees while entering the clearing that separated the forest. The strength I’d felt earlier surged new life into my tired muscles and I knew once we crossed the clearing, the boarder between our clans, they wouldn’t follow. If only I could stop their pursuit. Yelling and shouting drew closer. They were only a matter of several feet away, right at the tree line. At only a fourth of the way across the clearing, I stopped, dropped Hikaru to the ground and rounded on the enemy. My eye caught something in the trees. There, off to the left, high in a tree and away from the clamoring group of men was the kunoichi. She just stood there, watching. Her presence peaked my curiosity, but I couldn’t worry about her now I had to buy us some time.

If only I could stop them. How? I thought.

You know…the voice cooed again, do it. Whatever you think of.

“I want them to stop,” I said out loud and held out both hands as if to hold back the approaching ninja. Instantly a strong gust of wind blew up around me, whipping my hair, gi and the tall grass into a frenzy of motion. The energy rush was staggering and I wasn’t sure what happened next. I equated it to a blackout because moments later I had Hikaru flung on my back and was bolting for the Chiao Clan tree line with incredible speed. I cast a glance over my shoulder to see a pile of ancient trees lying on the ground and Shimoshuki ninja trying to get past them.

Did I do that? I wondered silently.

I ran through the trees, zipping around boulders and thorny bushes until I started to tire. I slowed to a walk and realized I wasn’t angry anymore. My mission was accomplished, I had what I wanted, and decided that all the energy I expelled must’ve drained my anger. I stopped and gently sat Hikaru on an old log.

“You’re still bleeding,” I said pushing back his extremely long hair as it fell forward and stuck in the blood.

“Well, I was lying across your back, so the jostling didn’t help,” Hikaru said with a smile.

“You got a pretty nasty bruise on your face where that guy hit you.”

“You think I can use my ‘battle scars’ to impress the ladies?” he grinned slyly.

“Yeah, you’re going to be back to your old self in no time,” I breathed a sigh and hoisted him to his feet, while placing his sword in its sheath. “You’re walking. We’re not too far away now.” I flung his arm over my shoulder again as we started off.

“Think Mayumi would like my battle scars?” he said.

I stopped abruptly and looked him in the eye, “Don’t even start, Hikaru, or I’ll take you back and dump your butt right on their doorstep,” I threatened in a very serious tone. For some reason I didn’t tell him about me and Mayumi.

“All right, all right, just yanking your chain,” he said. “But I do want to thank you for saving me.”

“That’s what friends do. That’s what Shinobi do…what we’re trained to do,” I said quietly. A silent communication radiated between us, the kind that said we’re brothers in many different ways and we’ll always be there for each other.[subscribe2]

6 thoughts on “TJ Perkins’ Art of the Ninja, Shadow Legacy”