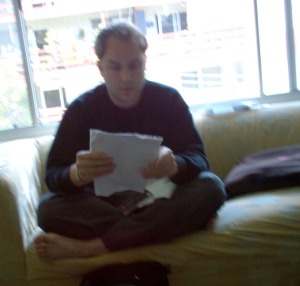 I have never been very good at expressing my emotions verbally.  I don’t have that problem when writing.  Which is lucky, because good writing must be emotionally honest to resonate with the reader.  Even when it is fiction, it must be honest.  Writers can’t afford to pull punches or hedge their bets…not if they want to really reach their readers and establish that all important connection…the one that makes reading so magical.  This can create some interesting problems.   END_OF_DOCUMENT_TOKEN_TO_BE_REPLACED

I’m the newest addition on the staff. Yes, you can call me Val, everyone does even though when they ask if I prefer Valerie, and say yes, they still call me Val. So I’ve given up. *grins* Just call me Val.

Wow, what a weird wonderful year it’s been.  At this time last year I didn’t even  know this weird guy named Stephen Hise.

I was still publishing through a small press back then – in fact, my latest would be coming out in a few weeks – and I’d learned a lot from them but they hadn’t proved to be the boost to my writing career as I’d hoped.  I had eleven or so novels in my back pocket written over the span of years that weren’t going anywhere. No, I won’t tell you how old I am. Let’s just say I remember assassinations and moon landings. Now, you have to understand that I’m a bit of a perfectionist – it comes from having a German (second generation) engineer for a father. He was also a Gemini, kind of cool and intellectual. But I digress. So I mined the internet, gathering every bit of information I could find on improving my writing, creating a pretty comprehensive list of all the standard mistakes writers make. I attended conventions (fortunately a big one was held here in Columbus Uhioh *that’s how they pronounce it here*.). I wrote and rewrote query letters. I had gotten close – an agent who actually called me at home on a Saturday – then backed away. A request for a full from a major publishing house…who then took over a year to let me know they weren’t taking my manuscript. (Truth be told, I’d already given up on them and sold it to my small press publisher – it was the one just coming out.)

It was getting pretty frustrating. I had self-published a book in print form – I really wanted to hold a book of my own in my hand before I died – but the whole e-book revolution was just taking off. Kindles were out, the Nook was coming out in color… I was seeing lots of fairy tales and scare stories about Indie publishing. (Don’t self publish, real publishers won’t take you. Self-publishing is just vanity publishing. Most self-publishers don’t make any money.) However I still had those novels languishing in my back pocket – good work, especially two or three of them – and they weren’t going anywhere. What did I have to lose… END_OF_DOCUMENT_TOKEN_TO_BE_REPLACED

I broke out in a cold sweat.

The message from my editor was polite but clear. What I had sent her, in the single-spaced Pages format as multiple attachments, broadcast exactly what she would be dealing with if I became her client: A wet behind the ears newbie who had a lot to learn. In fact, I needed to learn everything at an accelerated pace because the book was ready for a professional look, and perhaps a professional polish.

I left my computer on that night hoping that in the morning, much like the millers’ daughter in “Rumpelstiltskin” I would find my document in the professional format I could send off to editor heaven. Alas, when I awoke the next morning my computer was as I had left it, awaiting my colorful vocabulary as I begged it to help me. END_OF_DOCUMENT_TOKEN_TO_BE_REPLACED