Physician and author Barbara Ebel has had multiple careers and multiple tragedies in her life. She weaves those themes into her fiction writing as well as characters she renders  from people she’s known, ranging from the gentle-hearted and the downright despicable. However, what makes her fiction writing unusual is the palpably credible medical knowledge with which she infuses her stories. She wants readers to enjoy her book, but also to learn something.

She says, “Since I am a physician and practiced anesthesia, my surgical, anesthesia, and OR scenes shine with accurateness. For instance, an Amazon UK customer commented on his review that he thought he could perform a liver transplant after reading Outcome, A Novel: There’s more than a hurricane coming. And after reading Operation Neurosurgeon: You never know…who’s in the OR, a reader can understand the pressure dynamics inside the skull and why that’s important. At the same time, the reader will be involved with a cunning interplay of characters during a brain surgery.”

Barbara does not work exclusively in fiction, though.  “I have written a book using my medical knowledge which is lay-person friendly, is motivational, and is a fun read for people over fifty. It’s called Younger Next Decade: After Fifty, the Transitional Decade, and what You Need to Know. I was also asked to write a children’s book about one of my dogs after he became popular in middle Tennessee as a therapy dog. The book with real pictures and from Chester’s point of view was so beloved, that there are now three books in the series called Chester the Chesapeake.

Barbara is no longer physically able to actively sustain her her specialty practice, but she says the next best thing is to write about it. “I still do medical lectures and practice medicine in other ways, but since the stories roll around in my head and I’ve learned the craft of writing, I find the creation of a book very fulfilling. Part of that inspiration also comes from the need to be constantly productive.”

Barbara says one of the challenges she sometimes faces in writing is just getting stuck. “You write fluently for some time because the scenes and ideas are at your fingertips, but then you hit a brick wall. It may last a week or a month. I just go with the flow and don’t push it. Sooner or later, my characters let me know what’s next.”

She usually has many people read and comment on her manuscripts. “It’s terrible – an author can literally stare at a typo and not see it after they have worked with their manuscript over and over again. Or they don’t realize a character’s name is misspelled. It takes the objectivity of others to catch your final mistakes. I have also hired a professional editor for most of my books.”

As for marketing her work, Barbara says,  “It seems to be the simple things that work best: a good website, tweeting, being invited and sharing on other Indie sites, and word of mouth. In December, over 3,000 of my books were downloaded (paid and free), so I’m making progress with being discovered by readers.”

She reads other indie authors including Mark Whiteway, Rebecca Forster, Tim Greaton, Sandy Wolters, Markee Anderson and more. ” These are not cookie cutter authors who have staff rushing behind a novel to finish and mass market it.”

Her advice to aspiring writers? “Keep your day job if you need an income and develop your skill on the side. You can do a lot as a part-time writer and learn the whole process yourself – from the writing, to the formatting, book covers, and publishing. Then you’ll be ready if you decide to take the full-time plunge.”

Barbara Ebel’s latest title is Outcome, A Novel  The “medical” part of this story revolves around a liver transplant. The book includes bountiful characters whose lives come together from Peru to Indiana. Readers also fall in love with a dog who gets caught in the middle of the crisis and whom we join from his point of view. Barbara says that a dog modeled after one of her own is always in her novels. 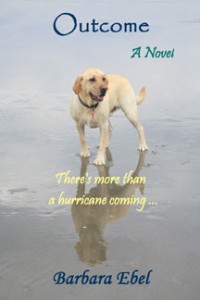 Outcome, A Novel: There’s more than a hurricane coming…

Hurricane Ivan roars. Karen Puno plans and packs and scrambles to flee. The wind whips and sand blasts her car as she descends the beach bridge with her Labrador Retriever. But up ahead, Karen has more to fear than the monstrous storm behind her.

A week later, tension mounts in a cockpit in Kentucky and the weather worsens. A feisty female pilot aborts her unusual takeoff, jeopardizing her passenger’s task to harvest a comatose woman’s organs for transplant.

Plagued with the Gulf Coast aftermath, a police officer is riddled with grief. In Peru, a worried husband receives dreadful news and in Indiana, a deserving woman is given a second chance. And in the seriousness of an operating room, an astute anesthesiologist works behind the scenes while a surgeon is nearly negligent.

Divergent lives come together after Karen’s accident and impact each other in permanent, intense, and heartfelt ways, as well as the hurricane-battered dog who escapes the crushed metal pile into the blowing sand and gusty winds.

Learn more about author and physician Barbara Ebel at her website. Her book,  Outcome, a Novel is available from Amazon.