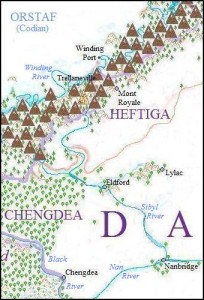 There, I said it. And while that isn’t a particularly damning admission, like saying “I love black tar heroin,” it’s not exactly cool. You’re not going to get far in a singles bar sidling up to somebody and whispering, “Hey, baby. You want to see a map made in Virginia in 1862 with The Confederate Territory of Arizona on it?”

So why bring it up? Well, it’s like this. Inspiration for us writerly types can come from just about anywhere, as I’m sure you all know. One sentence in a conversation, dog running down the sidewalk, Liquid Plumr commercial (that’s how they spell it). Absolutely anything can trip the synapses fandango, and send any one of us down a scribbling path we had no idea was there.

Maps, for me, are one reliable source of inspiration. The reason for that, is even though we tend to think of them as static, they absolutely are not. Setting aside geography for the moment and just talking about political maps – what you are really looking at when you look at a map is nothing more than a snapshot. A moment in time. Think about it. When you were a kid, how many Germanies were on a map? Where were the borders of the Soviet Union? What nations were on the Baltic Sea, or the Adriatic? Yugo-who-now? And that was not very long ago at all. On a cartographic time scale, that was yesterday.

History moves, the world changes, and the shorthand method of recording the changes is to draw a map of them. This was yesterday…this is today. But when a line moves on a map, or a name changes, there are thousands if not millions of lives being changed, and stories playing out. A mapmaker’s eraser takes no prisoners.

I write Epic Fantasy, and I’ve always read Epic Fantasy, so of course I love all the Tolkien and Eddings and so forth and so on. The usual suspects. And I *love* the maps at the beginning of those books, bookmark them so I can flip back while I’m reading whenever a different kingdom or river or town is mentioned. Where is the story now, where are we going, what are we going to have to go through to get there? Love it, love it, love it…but.

But those maps don’t change. Mordor is still Mordor after three books (four if you count The Hobbit), and the Ulgos still live in Ulgoland ten books down the pike. And while I’m not complaining or suggesting Tolkien or Eddings should have done anything other than what they (brilliantly) did, I also knew going in that the stories I had to tell were going to play out in a different way. Because I love maps. Because for me, they are only a moment in time.

I am four books in on my own series, and the maps at the front have been different in each one. Armies are moving, dynasties are dying, and a lot is up in the air. Whole kingdoms are no longer with us, and some names that used to be spoken with national pride are now only whispered. There was a city called Larbonne under siege at the beginning, but now the fighting is over and people call the place “Devil Town.” Because the New Boss is not the same as the Old Boss.

Now that I think I have my point surrounded, I’ll go ahead and make it. Maps still inspire me to tell stories, but at the moment the maps doing so are my own. When I’m stuck, or trying to figure out what road the characters need to go down next, I spread out the multifarious maps I’ve been making along the way. Most are from long before the time of the present story, but that still matters, as the past never really goes away (nod to Utah Phillips and Ani DiFranco). Other maps changed while they were being used: Some things got X’d out, arrows in colored pencil marked who was going where, and if they made it. There are sketched maps in spiral notebooks, some on graph or drafting paper, some scanned into a computer a prettied up in Paint. And when they are covering the kitchen floor and I’m sitting on the edge of a table to see them all, I can see my world. Where it has been, where it is, and where it is likely to go next.

Inspiration is magic, and it can’t be forced or tricked into action. But sometimes the ritual can help – can get your writer’s brain to the right place where it slips the bonds of the everyday, and runs around in the sunshine. For me, X marks the spot. I wish you all nothing but the best in finding your own place. Whether it is on a map, or not. 😉

“Poor Lewis, he was clearly terrified of female sexuality.”

The Chronicles of Narnia by C.S. Lewis

M. Edward McNally is the author of the Norothian Cycle books: The Sable City, Death of a Kingdom, and The Wind from Miilark, and multiple free short story volumes titled Eddie’s Shorts. He has been writing for twenty of the last thirty years and does not recommend the ten year spell of writer’s block in the middle. Ed is a contributor at Indies Unlimited (IU Bio Page) and tilts at his own windmills over at http://sablecity.wordpress.com/ (where he also posts a bunch of maps) 😉

22 thoughts on “Ed’s Casual Friday: You are here. (Maps and stories)”