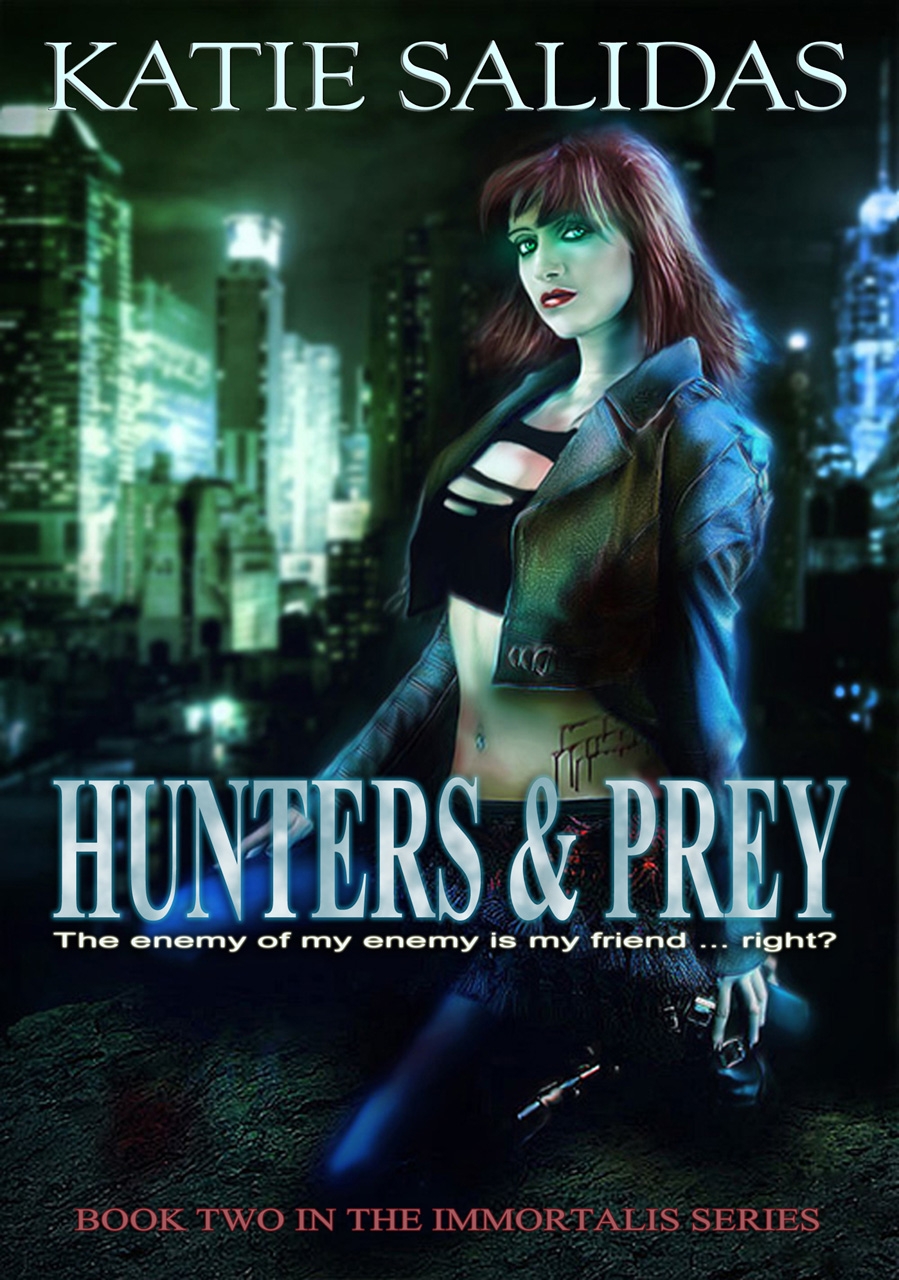 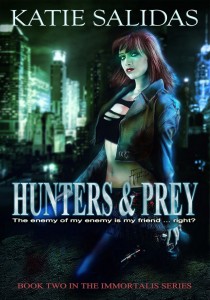 Hunters & Prey is available from Amazon.com, Barnes & Noble, and Smashwords.

And now, from Hunters & Prey:

This man would pay with his dying breath.

My victim moaned pitifully. He beat against my back, struggling to free himself. I tightened my grip, locking his body in my deadly embrace.

He was going nowhere.

The heat from his blood coursed through my veins, strengthening me, warming me, giving me his life-energy. I savored this feeling: the tingling rush, the ecstasy, that filled my being.

Just as the wave of pleasure crested, his heart slowed to an erratic thump, and the gushing fountain became a trickle. I knew he wouldn’t last much longer. His blood pressure was dropping.

I lifted my head and gazed into his fear-filled eyes. “It’s no fun when you’re on the receiving end, is it?” I smiled at him, licking the last few drops of his blood from my fangs.

My head swam with energy—his energy. I felt powerful, strong, and just.

The wretched man was like putty—just a lump of mush—in my hands. Weakly, he exhaled a final dying breath. The light of life in his eyes extinguished. His head lolled and then flopped backward.

I listened carefully. His heart thumped once, twice, and then … nothing.

I bit my tongue and swirled a mix of my saliva and blood across the wound on his neck, ensuring it would close. The evidence of my feeding would be gone by the time anyone found him.

A strange prickling sensation tickled the back of my neck. The hair on my arms stood straight on end. I had come to know this unmistakable feeling quite well since I’d been turned. Another vampire was close.

I dropped my victim unceremoniously on top of the woman he’d just killed and turned around to scan the area. Though the street was dark, my vampire eyes had no problem spotting another pair of pale eyes staring back at me from the shadows.

A footstep broke the silence. Still young, I’d had limited dealings with other vampires. Not all were friendly. I hoped the one watching me would be.

“I know you’re out there,” I called to the darkness. “Show yourself.”

Raspy laughter crawled out of the shadow. “Are you sure you want me to do that, Alyssa?”

In the space of a second, realization hit me. My eyes went wide and my heart slammed into my chest.

Another footstep echoed around me as he moved into the light.

A trademark of the vampire kind, his blue-gray eyes seemed to glow as he looked at me. A wild mane of salt-and-pepper hair jutted out in all directions on top of his head. Deep-creased wrinkles and scars covered an aged face that had seen many battles. His lips pulled back into a predatory smile, revealing a perfect set of sharp white fangs.

I was running before I could even comprehend the thought of it. I needed to get away. Fast.