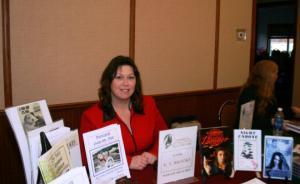 That’s pretty much how I feel each time I’m invited to do an event. Cake?: staying home in my hermit writer’s cave, glued to my WIPs, email and social networking. Death?: going to an event which makes me feel like I’m basically on display at the author zoo.

We’ve been through this – you know you have to do the event. (See my post here.) Sure, it blows half the day getting your stuff together, having the ghost of Leona Helmsley do your make-up, and dressing up like a monkey. Okay, maybe that wasn’t you. But you get the picture.

If you live on a dirt road, you don’t want to lean up against the car in your black pants. You also don’t want anyone to see that those same pants are covered in white dog fur. But you weren’t anywhere near the dog…doesn’t matter. Static electricity attracted every piece of loose fur in the house onto your pants. You are so static-charged that you could power the Las Vegas strip for an evening.

Then you get to the event during set-up time. You immediately realize that despite the fact it’s an evening event at the Country Club – it’s not formal. And, in your fitted suit, not only do you feel grossly overdressed, you’re now overheating because it’s hot as hell. You’re wishing you’d brought a change of clothes – and not for those reasons – but because the Country Club carpeting is stepping up the static in your pants and they are now clinging to you in a revealing manner from your ankles to your…well, you know. You’re afraid if you touch anything that not only could you cause a power outage, you might even spontaneously combust.

After making three trips from the car to your table lugging books and displays, you realize that you are by far the youngest person there. At almost 50 years of age, you don’t find this comforting. The authors on the end table next to yours are blocking your access by setting up life-size cardboard figures of themselves. You now have no idea if you will have your stuff set up before the doors open, since they are oblivious to the fact you cannot get by them. You suspect their hearing aids are turned off. You go to the front of your table and start unloading from that side. You check your name tag, and they’ve got your first name wrong. Good – that’s an excuse not to put a pin through your nice suit. Besides, your suit is filled with so much hot, staticky air that if you poked a hole in it, the release could cause a shift in the time-space continuum.

As you set up, you notice you’re missing one of your Lucite stands. Eh, whatever. You scan the other author tables and see that some of them have customized metal display racks and 20 different titles. You have nine titles and a bad attitude. Now you feel like you’re not really that prepared. Of course, you didn’t really spend any time preparing. You’ve been doing this kind of thing for 11 years now. What were you supposed to do?

6:30 p.m. finally arrives. The doors for the library fundraiser open. A few folks straggle in. You hope the newspaper will show up, maybe do a story. Perhaps the library will take some pictures and post something on their web site. Free publicity is never a waste of time. No. And no. And the woman doing the introductions screws yours up. Badly. How’d that happen when they asked you to write it yourself? She decided to improvise. She got the titles of both series wrong. You’re now glad you forgot your video camera to capture that.

After the schpeil about the silent auction items and supporting local authors and libraries, people start milling about. One of the authors from the table next to you comes over. He’s an old, friendly cowboy, staggering about with a full pint of beer. Really full. And each time he says something, he motions with his hand, tilting the glass. You’re waiting for him to spill it on top of your table, soaking your books. You had to pay for those books. You text a friend asking if they’ll call in a bomb threat. Finally, the leaning tower of lager dude moseys off.

He is replaced by a woman who lurches over your table, scanning each book. She then asks “Did you DO all these?” Do? You want to ask her “Did I do WHAT to them? Do you not see my name on every cover?” but instead you say “Yes, I’m the author.” Her reply is “Oh.” She walks away.

You’re just starting to understand the true meaning of “going postal” when a man appears in front of you. He examines each book, then touches the first in your adventure series. “I read about you in the paper a while ago,” he says. “Then I went to your web site and looked into your books. Your spy stuff is very interesting. Which book should I buy?”

He did not just say that, did he? You perk up. You discuss the difference between plot-driven and character-driven stories. He gives you money. You inscribe a book. People start coming over to your table. “Mr. Pish? Oh, sure! I’ve heard of these books.” You talk about how your children’s books are being used in schools in the USA, Scotland, and Mexico, and how an entire kindergarten class in Guadalajara sent you thirty postcards you can’t understand, but you don’t care because they’re awesome.

During a lull, the author to your left tells you that she’s the book reviewer for a regional arts magazine. “Do you have any new books I could review?” she asks. You hand her the two that make reference to the local area. “If you send me a self-addressed stamped envelope, I can mail these back to you when I’m done,” she says. She then gives you her address.

Eight o’clock arrives. The doors close. You’ve forgotten that you were annoyed, hot, staticky, and somewhat unprepared. You know that even though you sold only one book, some people didn’t sell any, and they drove in from a lot farther away. You gladly pay the library their two dollar commission. You begin hauling your stuff back out to your car, glad another event is behind you. That’s one more time your name got in front of folks, one more book sold, two potential upcoming reviews in a journal you’ve been trying to penetrate, and a help to the library. You roll down your windows and drive home on a beautiful evening. Soon you’ll be out of that uncomfortable suit. As long as you don’t touch anything metal you should be okay.

(Credit for the title “Cake or death” goes to comedian Eddie Izzard.)

27 thoughts on “Cake or Death? Yet Another Author Appearance”