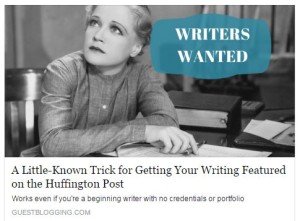 If you’ve been hanging around Facebook at all lately, you’ve probably seen this ad, complete with its clickbait headline. (Note: any ad whose title contains the words “a little known trick” is clickbait. But you knew that.) Sounds legit, right? I mean, everybody wants to write for the Huffington Post. It’s a huge name in online media, and having a post there gives you legitimacy (and, hopefully, eyeballs on your other work) like whoa.

I wondered what the little-known trick was, so I clicked. Here’s what I found. File this under We Do It So You Don’t Have To. 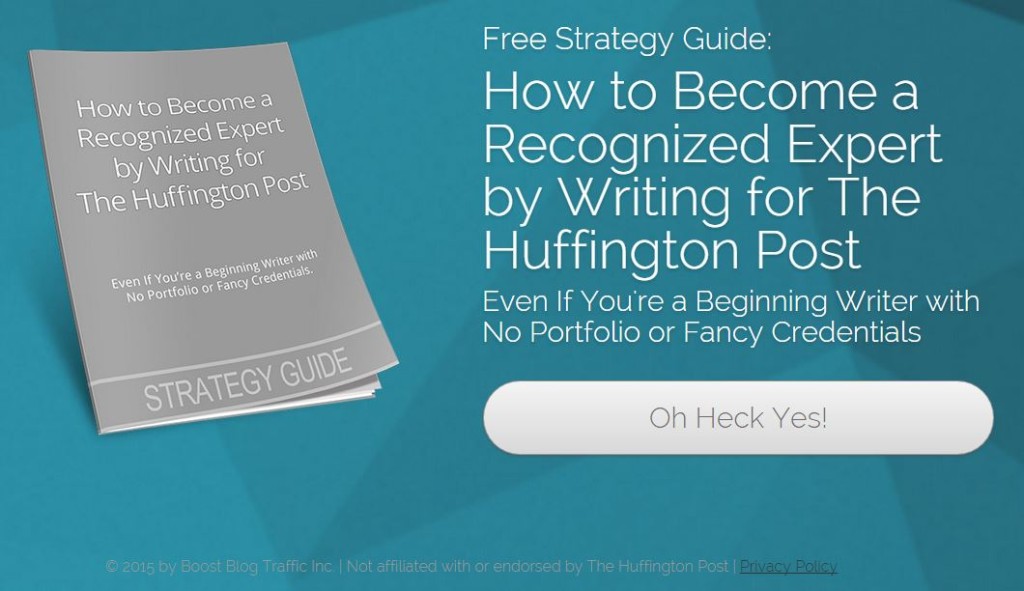 See that big, enthusiastic button? Clicking it gets you a pop-up box. You have to type your email address in the box to get any farther. Well, what’s a little spam if it’s going to get me a primo spot at HuffPo, right? I gave them my information and went on.

The next page is full of typical marketing copy. HuffPo and other big blogging sites are the place to be. They won’t pay you, but you’ll get eyeballs on your work, etc. The key is to write stuff that’s worthy of their interest, and to know who to send it to. Of course, HuffPo and other sites don’t publicize contact info for their editors. But we have that info for you! Want to download it? Just click here!

So I clicked. And here, at last, is the meat of the thing: They’ll give you the “Rolodex” for $7. Major credit cards accepted.

Seven bucks is pretty cheap for the endgame of such an elaborate marketing pitch, so I suspected there was more behind it. Take another look at that pretty blue landing page above. The website name is guestblogger.com, but the copyright holder is Boost Blog Traffic Inc. The guy behind that site is Jon Morrow, a former associate editor for Copyblogger. At Boost Blog Traffic, he offers a GuestBlogging Certification Program, which he promises will “bump you to the head of the line” with editors at the top blogs and will “change your life.” No, really. He says so in the video here.

If you guessed that the certification course costs more than $7, you were right. It’s $297, payable in three convenient monthly installments of $99 each. Major credit cards accepted. (Some online reviews say the price is $591, or $197 per installment, but the $297 price is directly from Morrow’s website. I’m thinking maybe he’s knocked the price down since some of the reviews were published. Or hey, maybe the lower price is a little-known secret.)

I was too cheap to pony up the $7 for the email list – especially with no information about how recently it’s been updated (although if what’s he’s offering are blind-box addresses like books.editor@topblog.com, it wouldn’t need to be updated as often as it would if he were listing the editors’ direct addresses). But I can’t help thinking that the low price is a way to get you to open your wallet for the more expensive certification course. I’m extrapolating from my experience in retail stores, where I’ve often found that I’m more amenable to spending money after I’ve put a product in my cart. It’s like committing to buy that one thing opens a floodgate, and I start looking for other stuff to buy. In marketing-speak, you might say the small “yes” is the precursor to the big ask.

The good news is that Morrow (or his bot) only sent me four emails over four days to remind me about the $7 offer. It’s been a couple of weeks and I haven’t heard from him again. Maybe he’s dropped me from his mailing list. Time will tell whether he’s sold my address to anyone else.