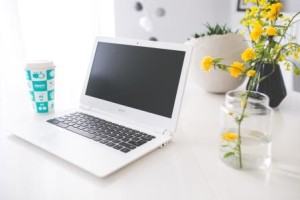 Melissa Bowersock wrote a post a few weeks ago about writing drafts longhand, and whether anybody still does it. It sounds like a lot of people do. I used to, but I don’t anymore. The last time I can remember writing a first draft longhand was when I was in graduate school and was writing my novel on legal pads on the Metro on my way to work. I remember getting some odd looks from other passengers. It didn’t bother me back then, but I think it would now.

That memory brought me around to thinking about the whole process – not just how we put our thoughts on (virtual) paper, but where we do it. Not everybody has a tidy study with floor-to-ceiling bookshelves and a roaring fireplace…and a cup of tea, or maybe a tot of something stronger… Um, hang on. I’m fantasizing again.

In real life, we all have our preferences for workspaces. Lots of writers like flexibility; they want to be able to work on their WIPs whenever the mood strikes them, or whenever they have ten spare minutes. That’s the biggest advantage of using paper and pen for a first draft, I think. You can write anywhere – at the breakfast bar, under a tree outside, at the beach, at a coffee shop, on the Metro, even at an actual desk. Laptop computers are almost as flexible, especially if you’re willing to tote around an external battery for a quick recharge. Although I’d be leery of taking a laptop to the beach. I can’t imagine sand and salt spray would be good for its innards.

Some people really seem to like writing in public places. J.K. Rowling wrote the first Harry Potter novel at a coffee shop. Others like to commandeer a carrel at a library. I’ve seen people camp out in Panera’s and other restaurants for the free wi-fi, and I have to believe some writing is going on there. I suspect this setup appeals to less-introverted writers, or those who feel isolated in their day-to-day lives; they’re looking for a way to be out amongst other people while they’re cocooning themselves mentally in their private writing worlds. I think this is the impetus, too, behind the social events that NaNoWriMo schedules during the month of November. The organization sponsors at least a couple of in-person events every year: a write-in at the beginning of the month, and a “thank God November’s over” outing at the end of the month. The idea, I suspect, is to make NaNo seem more appealing to extroverts who balk at shutting themselves away from other people for all the hours it takes to write 50,000 words in a month.

At the opposite end of the spectrum are the writers who look forward to shutting themselves away to write. These are the folks who believe they cannot write in public, because any sound or movement will pull them out of their writing hypnosis. They’re the ones who set up a home office – and when it’s time to write, they tell family members not to bother them unless someone’s bleeding. Others use music as white noise, or noise-canceling headphones, or both. Some go so far as to build a tiny dwelling – a cabin or shed – in the backyard and kit it out as a writing cave.

Some of us would kill for a writing cave.

But most of us, I suspect, have to make do. My current setup is not one hundred percent ideal. Typically, I write on my all-in-one desktop with the 24-inch monitor. My desk is in the living room of my one-bedroom apartment, which isn’t a problem unless someone is staying with me – which has been the case for most of the past three years. I can’t write with music, because no matter how ambient the sound is intended to be, it still distracts me. The good news is that my daughter is also a writer, and she doesn’t mind wearing headphones to listen to her music while she writes. So we make it work: I sit at my desktop behemoth, she sits at her laptop at the dining room table, and it’s fine until one of us needs a break and distracts the other one.

Where do you write?