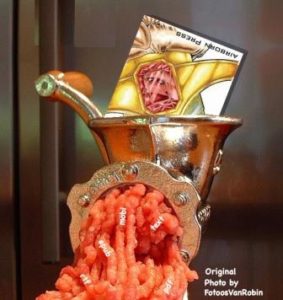 This is not a post that will teach you all sorts of wonderful things. This is a lament to make you all feel better, because it shows you that somebody else goes through the same epic battle as you do throughout every step of the self-publishing trek. In this case, the obstacle is keeping track of manuscripts during the publication process.

It all started when I went into the hospital for minor (and I emphasize the “minor” part) leg surgery, and made the mistake of allowing my wife, Linda, to stay with me while I had the pre-surgery chat with the surgeon. You know, the one where he writes a big arrow on the appropriate leg and signs it with a felt pen, just to avoid mistakes. But my mistake was letting Linda hear what he had to say about how long I was supposed to take to rehabilitate myself.

So there I was, trapped in the house for a whole week, not allowed to do, basically, anything, no matter how good I felt, because Nurse Ratched stood at the door with a club (figurative of course).

I decided to make good use of my time by going into my backlist and doing some promotion. But if I was going to do promotion, I thought it would be a good idea to do a re-edit on those books since some niggling errors had been found after publication. Which I proceeded to do. I also added all my more recent books to the “More From This Author” page, and removed a great number of commas.

The advantage of this procedure was that I discovered, to my horror, that in 2013 I had uploaded a new version of Cat With Many Claws, the second book in the series, but I had uploaded it into the file for the first book, A Sword Called…Kitten? So Kitten hadn’t been available on Smashwords for three years, and I didn’t even know it. Well, I guess readers will learn something from this post. Like, Don’t Do Stupid Things. But you all knew that, anyway.

The First Stage of the Trek: the Edit

And here’s where the saga begins. I publish my eBooks on Smashwords and Kindle, and my dead-tree editions on Createspace. Each of these demands a different format. So this requires three different versions of each MS. So when you do an edit of one version, you have to keep track of all the changes for the other two editions. Now, I work in MS Word on a Mac, but Word and OS10.11 (El Capitan) are deadly enemies working under a cease-fire agreement.  So using the “Track Changes” function crashes the program immediately, every time.

Thus I am back to the old-style method of setting three manuscripts up side-by-side (by side) and switching back and forth every time I make a change. Very time-consuming, but I got through it. After all, I had nothing else to do but sit and feel my muscle tone drain away.

It was discouraging how many errors I found. I’ve learned a bit about editing in the past six years, so the results will be much cleaner copy. I hope.

Second Stage: Preparing for the Upload

And then the fun began. Because now these three different editions had to be uploaded into the gaping maw of each separate company’s electronic publishing program. At least Smashwords is honest about it. They call theirs “The Meatgrinder.” This program shreds your MS down to its component parts and spits it out, reconstituted in all the proper formats: about eight of them. All fine and dandy, but show me a tool designed to do a whole bunch of jobs, and I’ll show you a tool that doesn’t do any of them very well (a Swiss Army Knife is a good example). Each of these formatting systems has very picky requirements, and there are a million and one ways to screw each one up. And now comes the real problem:

It is absolutely impossible to keep track of three different versions of two different books unless you have a cast iron file-naming system. Years ago, in my beginning naïveté, I named them by the name of the book. Sword Called Kitten and Cat with Many Claws. Silly me. Then I started giving them version numbers, “Sword1,” Claws7,” etc. But that got me into all sorts of problems of the kind I mentioned above, where I entered the wrong MS in the wrong file. You can see from the image how complicated it got. Some of the earlier names are pretty useless. 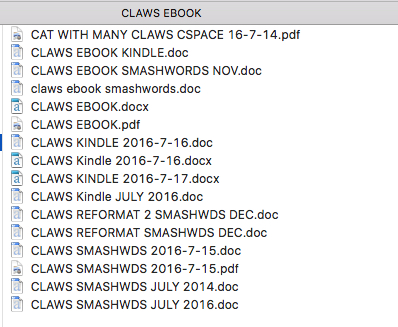 I have finally taken a page from my experience when I worked at the Olympics. There, we named every file by its date. So my versions became, “Claws Kindle 2016-7-15,” which kept things pretty much in order, and not too lengthy. (Note that the .pdf at the head of the list is the Createspace version, and it’s in the wrong place because this is the eBook file. Hey, I can find a lot of ways to fumble the ball.)

It’s amazing the capacity even an intelligent human brain has for screwing up. Just to give you an example; this morning I attempted to upload my final Kindle version of “Claws” to Amazon. Fortunately, Kindle allows you to preview your MS before you submit it for verification, because I made several small mistakes.

1.  I had done a lot of copy-and-paste, and first I discovered that I had left the “Smashwords Edition” on the Kindle version. Amazon was. Not. Amused. Edit and resubmit.

2. Then I discovered that when I cut and pasted “Amazon Edition” in, I had inadvertently cut the preceding line as well. Edit and resubmit.

3. This time I discovered something else wrong. I can’t even remember what it was, my brain was getting so fuzzed. I think I had uploaded the .doc instead of the .pdf. Edit and resubmit.

4. Then I noticed that, in cutting and pasting my list of new books, I had saved time by copying a page from a different series, and I had removed the cover designer’s credit. Edit and resubmit.

So, after four tries, I think I have finally uploaded the file I wanted. I have submitted it for verification, and I await my confirmation e-mail from Amazon with trepidation.

But if you hear a tale about an author in suburban Delta, B. C. self-immolating in a blazing pile of books and computers, you’ll know that the Meatgrinder has consumed another hopeful soul.

Write an obituary for me. But be careful what you name it.