Holy Hand Grenades, you mean my second “Casual Friday” post is slated for Friday the 13th? Geeze, that seems like the kind of thing I should have cleverly incorporated into a topic…if I had looked at a calendar before I actually wrote the post. So let us pretend I did. In honor of Friday the 13th, my thoughts on something really scary: Dialogue Tags! (cue thunderstorm noises) 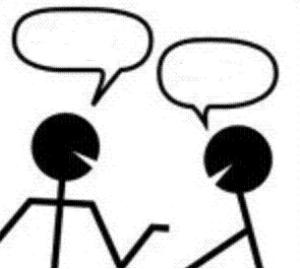 First off, I should say that what follows is of course my opinion. I’m not trying to tell anybody else how to write, and yes, our individual literary foibles may indeed be part of what gives each of us our own “style.” However, believe me when I say that there are certain things that are going to look like mistakes to a large number of readers, even if a writer is doing them on purpose. James Joyce made up grammatical and narrative rules as he went along, and some people think he’s a genius for doing so. He’s also rarely read nowadays outside of Lit grad courses. Just saying.

So here are Ed’s Three Quick’n’Dirty rules for dialogue tags:

1.)  The best dialogue tags aren’t there.

“Something up?” Joe asked.

“Have you seen my cheese danish?”

That’s enough. There’s only two people in the scene, so after one talks, if there is a paragraph break and a new set of quote marks, the reader knows who is talking without being told. Same way, if two people are having a conversation, every line does not need a tag if they are speaking in turn. Dialogue tags serve one basic purpose: They tell the reader who is talking. If you can reasonably tell who is talking already, my advice is cut the tag.

This is where it gets into style, and I am not about to say that I never put an adverb into a dialogue tag. But I do think about it every time.

“Did you eat my cheese danish, you fat sack of crap?” Jim demanded angrily.

Angrily, huh? No kidding. Was anybody reading that not going to know Jim was upset? Has anyone ever said “fat sack of crap” happily or fondly or esoterically? Possibly they have, and in any of those cases I would say yes, do tell the reader Jim is speaking “fondly,” because otherwise a reader might indeed not know it. But 9 times out of 10 if a reader knows somebody is happy and they say something “happily,” it’s just redundant and it looks like overwriting. Adverbs have a tendency to become a “crutch” for writers who maybe aren’t conveying something in another way. To people who read a lot, they tend to stick out like a hammer-banged thumb. I’d recommend always giving your adverbs a second look, particularly (adverb) in dialogue.

Yes, quite often in an editorial stage, the word “said” looks like it’s just not enough. And so, the industrious writer with access to a thesaurus will start uncorking some real humdingers. Stated, announced, proclaimed, declared, verbalized, uttered, disclosed…let alone shrieked, barked, growled, spat, so on and so forth.

But here’s the thing: The brain doesn’t read like it edits. In normal reading, that weird gray organ hands off a lot of higher functioning to some simple pattern recognition software, so that its “attention” can focus on other things. Dialogue tags function to tell the reader who is speaking, and if the brain sees “Joe said” or “said Jim,” it makes note of the speaker but does not process “said” as anything more than a marker.  Just like when it sees a period, it knows the sentence has ended without having to think about how weird and random it is that a tiny black dot was chosen to indicate that. Period.

By using a word other than “said,” all you are doing is drawing attention to the dialogue tag, and away from the dialogue. Am I saying never use anything other than “said?” Of course not. If you want the reader to know somebody is growling, or if it is important that the imperious cheese danish seller “proclaims,” then tell them so. But, as with almost everything in life, it is all-too-easy to overdo. Most times, “said” is all you need to say as a writer, or else you are just distracting from what the characters are saying.

“That’s all I got for this week, thanks for reading,” Ed trumpeted majestically.