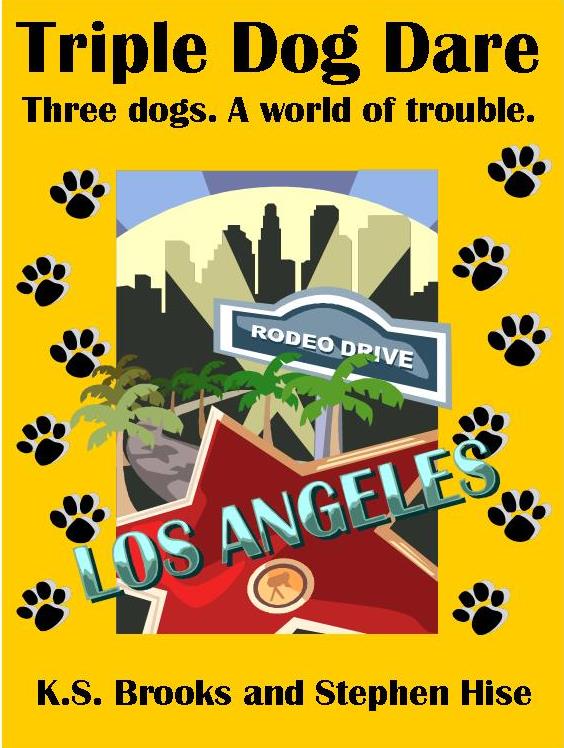 I got the idea for Triple Dog Dare a few years ago. At the time, I had only a few of the key elements pegged; and, I knew I wanted it to be something akin to Mr. Pish meets It’s a Mad, Mad, Mad, Mad World. I also knew I didn’t have the chops to write that kind of madcap comedy – and my process of percolating plots can take years. So I put it on the back burner.

After the release of Bad Book, I was pretty jazzed up at the comedic talent exhibited by both Hise and Mader. So, one day in April while I was discussing Indies Unlimited blog business with Hise (yes, we actually do work – this isn’t all fun and games, people!), I mentioned the idea I had about a crazy book about a dog and some whacko characters. The next thing I knew, we were brainstorming plot ideas.

See, this is where it gets good. We’ve established numerous times that I’m incredibly lazy. To me, staring at the blank page and creating is difficult. So, I got Hise to do that part. Since the idea of the book was mine, Hise did the courteous thing and suggested that I go ahead and write the first chapter. Well, I showed him, all right. I wrote a really bad few pages – completely on purpose, mind you – so that he would be like “Well, Brooks, um, how about I give it a shot?” And BAM! That worked like magic. Okay, so maybe I didn’t write that first chapter badly on purpose. Or maybe I did. You’ll never know, now, will you?

Hise’s twist on the first chapter blew me away. So, we decided that he would lay down the gist of the chapter, and I’d come in behind him and put some meat on the bones. It was unfair, really, since he did all the hard work. Oops, I mean, since I did all the hard work. Polishing is like editing. It’s really…draining! (Okay, so I’ll admit; I find that so much easier, and more fun, too.) Another good thing is that Hise is great at twist endings. I can’t say whether or not I’m good at them – my issue is that I like to spend a LOT of time with my characters, understanding where they come from and where they’re going, their motivation, etc., yadda yadda, before I can mess with them. Hise doesn’t need to do that. He writes quickly, creatively, and with a confidence that, quite frankly, annoys me. I’d like to be able to write like that.

Differing styles is one place where collaborators could run into trouble. Hise and I do write very differently – but in our case, we’re able to use that to our advantage to create full-bodied text. I’ve never, in my life, written a project from multiple points of view, yet Hise can do so effortlessly. Again, mildly annoying. He works hard, I hardly work. See? That’s very complementary.

Would I collaborate on all my projects going forward? Probably not. Some things are just too personal, and some characters have been with me for too long. But when it comes to comedy or genres I wouldn’t normally venture into, I think having someone do the work for me – er, I mean, having someone to make that journey with is reassuring and, if you do it right, a lot of fun.

20 thoughts on “The Secret to Collaboration”