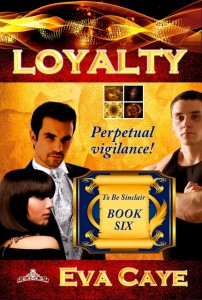 Today we have a sneak peek from the sixth book in the science fiction/romance To Be Sinclair series by Eva Caye: Loyalty.

The dangers of being Imperial mean Princess Anne, Prince Christian, and Prince Brian must cultivate mindful paranoia as their lifestyle. When the Stargate Fleet is attacked, Serviceman Christian and Sentinel Brian fight invaders and traitors to protect Anne, Stargate Scientist! Yet how can they hope to find spouses who are equally vigilant?

Zealous in their chosen careers, they survive treasons, abductions, and separations from paramours only through the support they give each other, lest the Empire be torn apart by their tragedies. But when the Palace itself is attacked, how will they hold the Imperial Family together?

Loyalty is available from Amazon.com, Smashwords, and Amazon UK.

Here is an excerpt from Loyalty…

Someone knocked on the door. Walking into the sitting room, she called, “Enter.”

Brian stuck his head in with a smirk and a glance around the room before coming in and closing the door. “No Andrés? I heard from the Palace Sentinel command post you had his name put on the register this morning.”

“Given that I have never done so before, I suppose they couldn’t wait to tell you. But no, he did not spend the night,” Anne snarled, flinging herself onto her front couch. “So, where is Cotton Candy-Brain? Still in your apartment, sleeping herself out? Why are you here?”

Brian snarled back, “God, you would have to bring her up.” He flung himself onto the couch, too. At her curious look, he grumbled, “We were in bed when I noticed she had a relatively fresh scar on her belly. I figured she had had her contraceptive implant taken out.”

“He… fascinates me. At least as much as I do him. I had never had anyone in my life before like him. I don’t know if that is love or not.” She focused on Brian. “What do you think?”

He shook his head and warded her off with both hands. “Oh, no you don’t. I’ve never been in love. I’m not about to comment on a situation about which I know nothing.” He returned her stare. “What does Mother think?”

Anne laughed. “She thinks it’s high time I had some fun. Even gave me some pointers I don’t remember from the book. I wonder who has the book now?”

“Don’t ask me; I haven’t lived in the Palace for four years. I can get you another copy, if you like.”

“What, I can’t just come tease you anymore?” Brian grinned at her frown but suddenly turned serious. “To tell the truth, when I heard you had him put on the list, I remembered Zhaiden’s breakdown when Renee was abducted. Do you want Sentinel to place a detail on Andrés?”

Anne fell silent for an entire minute before tears began creeping down her face. Brian slid to her side and took her hand. “What’s wrong, Annie?”

Looking up and into a distance, her voice wavered. “I guess I am as much a danger to him as he is to me, huh?”

He put his arm around her. “Well, yes, but that is true for all of us. And true for anyone we might meet. But that’s the purpose of Sentinel, to protect us all, so you might as well take advantage of it.”

Anne sniffed and nodded gravely. “I’ll tell him tonight. Will you be around if he has any questions?”

Hugging her to him, Brian assured her, “You bet.”