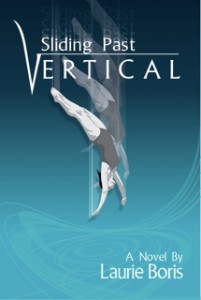 Today we have a sneak peek from the new novel by Laurie Boris, Sliding Past Vertical.

Sarah Cohen is a walking disaster. She means well, but the ex-diver’s hasty decisions wreak havoc on her life in Boston. Good thing Emerson is a phone call away in Syracuse, with a metaphorical mop to clean up the mess. Their long-distance friendship can be excruciating for him, though. Years after they shared a brief college romance, he’s still in love with her. When everything goes wrong, Sarah takes another plunge: back to the scene of her last mistake, to start fresh. Unfortunately for Emerson, the move puts her too close for comfort. Her attempts to straighten her life’s trajectory are sometimes amusing and sometimes catastrophic. With Sarah around, is anyone safe?

Sliding Past Vertical is available through Amazon.com and Amazon UK.

Here is an excerpt from Sliding Past Vertical…

“I spoke with her last night,” Rashid said.

Milk dripped off the piece of chocolate donut Emerson had just dunked into his glass. Rashid merely sipped his tea, prepared, as always, with one sugar, stirred five times counterclockwise. He set his cup on a folded napkin, arranged his small, brown hands right over left on his lap, and gazed mildly ahead.

Emerson chewed his bite of donut. He admired his housemate’s resolve. It terrified Emerson to imagine spending the rest of his life with a stranger of his parents’ choosing. His greatest fear was that she’d find him inadequate, that she’d long for a “manlier” man, with broad shoulders and a square jaw, one who would take charge, make lots of money, never complain, and always know how to fix things. Inevitably, she would leave him and sleep with other men, like Sarah had. He swallowed and said, “How did it go?”

Rashid shrugged. “She comes from a good family. She is studying business management.”

“It’s a very demanding program. I don’t see how she has time for much else.”

“No, I meant, that’s all you learned about her?”

“It was a short conversation.”

“But she’s…no offense, but a total stranger. What if you’re, you know, wildly incompatible?”

“My parents would never choose such a woman for me,” Rashid said. “They know me best and only have my best interests at heart.”

Emerson noted the quiet confidence radiating from his friend. There had to be a great sense of security in knowing that when you’re ready to marry, a compatible woman would appear. How much time, money, and anxiety had Emerson wasted on women over the years, looking for someone who could love him? And how many fragments of his soul had died in the quest?

“At least her voice isn’t unpleasant, and that is a good thing.” Rashid took another sip of tea, set the cup gently on the table, and straightened his spoon. “Don’t you think?”

Emerson looked up from his breakfast. It was the first time he’d seen Rashid display anything less than utter sangfroid about his impending nuptials. The corners of Emerson’s mouth dipped further down; his shoulder sagged. Maybe he would continue to flounder with the opposite sex. Maybe he’d been hurt and disappointed. And maybe he’d never find a woman who would love him as much or in the same way as he loved her, but he hoped to God that when and if he did marry, he’d have more good reasons to cling to than a voice he didn’t detest.