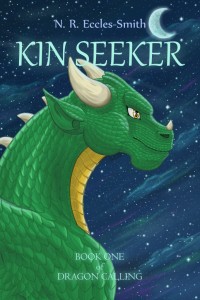 Today we have a sneak peek from Kin Seeker, the fantasy-adventure novel by N. R. Eccles-Smith.

As the last dragon, Laeka’Draeon holds the key to finding his missing kin and restoring the barriers of Klonnoth Aire. The problem is he has no memory of his past, or what happened the fateful day the dragons disappeared.

With the kingdoms in disarray, blighted by strange terrors, Laeka’Draeon has no choice but to take action. If Klonnoth Aire is not restored, the consequences could lead to war and ruination. Aided by unlikely allies, including a spirited unicorn filly and an eerie-eyed phantom, Laeka’Draeon braves dangerous realms in search of answers, and quickly finds himself part of an unforgettable adventure.

Kin Seeker is available at Amazon.com, Smashwords, Amazon UK, and many other online retailers.

Here is an except from Kin Seeker…

A pulse of compressed energy tore across the endless darkness, unleashing an outbreak of chaos. Rows of swirling lights appeared, bright enough to capture glimpses of distorted shapes rushing in and out of sight, chased down by more than their own shadows. The air pressed in, smothering and toxic with fear.

‘We must flee!’ cried a voice, distraught and shrill.

‘There is no safe haven now,’ someone hoarsely replied. ‘It is too late!’

The ground shuddered from the heavy galloping of large feet and the air throbbed with cries of terror, shouts of anger and a medley of fierce roars.

He hung back, bearing witness to the turmoil as though behind an unseen barrier. Sickened and weightless, his insides twisted with a pounding fear. Something terrible was closing in, and he felt so powerless against it. Only the walling presence of the two large creatures standing on either side of him offered any comfort. Although he could not see them, even when he turned his head to look, they were there, united in shielding strength.

‘It is what must be done,’ a voice murmured, deep and sorrowful, filling the air. ‘It is the only way … and our only hope …’

The presence of the guarding creatures faded. Coldness overcame him, and the cries of terror swelled to an unbearable level. Above, the clouds churned and surged, burning like blood-red fire. Everything violently warped out of his control.

‘It is coming!’ Someone screamed.

He screamed too, and the sound of his own noise dissipated the darkdream and flung him into wakefulness.

His vision was slow to return to focus, his limbs sluggish and weak. Every muscle in his body ached, and a disorientating buzz filled his head. It took a few moments to realise he lay inside a small cave, although why he could not recall.

Facing the cave mouth, he shuffled over the cold soil toward the light of sunrise, and with a throaty groan, collapsed outside. Several sharp objects jabbed into his stomach and chest, causing him to jerk away. Grimacing, he knocked the loose stones aside, before squinting at his surroundings. ‘W-where am I?’

Grassy hills and tree-clustered valleys dipped and rolled in every direction, closed off from the rest of the world by a range of steep ridges the colour of cold grey.

What is this place? How did I get here? And why do I feel so weak? When he tried to think back on his past actions, only flashes of the darkdream returned, chilling and obscure. Beyond that, nothing existed but an eerie void.

‘What’s going on?’ He glanced at his front paws, shocked by their unfamiliarity. With a gasp, he looked over the rest of his body. Scales the colour of polished emerald covered him, fading into a burnished yellow down his neck and across his belly. Sinewy wings arched above his shoulders, and a strong tail extended from behind his hind legs, narrowing to an arrow-shaped tip.