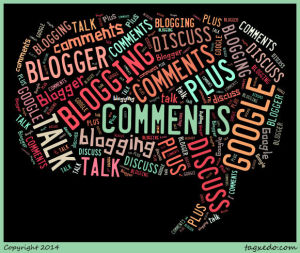 The idea of having a blog is not just to sell books – although, hey, if someone’s moved to buy mine after reading one of my posts, I’m not going to stop them. But ideally, you’re blogging to offer your thoughts and ideas to the Universe, and maybe even get a dialogue going.

“Having a dialogue” implies that your readers are responding to your posts. And yet, one of the biggest problems I had when I began blogging on Blogger (also known as Blogspot) was that people had trouble leaving comments. Blogger’s native comments system had multiple quirks – the sign-in process was kind of crazy, and oftentimes it wouldn’t let people post replies at all. I ended up with comments about my posts on my Facebook page, on my Facebook timeline, on Google+ – everywhere but on the actual post. Makes it hard to get a dialogue going.

Blogger users, as well as Blogger itself, had come up with several workarounds. I tried a few, and they worked, more or less. But really, you shouldn’t need a workaround for something as basic as allowing a reader to comment on your blog.

When Google bought Blogger, one of the best things they did was to fix the comments function by integrating it with Google Plus. The downside is that your commenters have to have a G+ profile. But the upside is that when you share a Blogger post on G+, people can comment on G+ and it will show up on your blog – and vice versa.

At some point, G+ sort of randomly offered me the option of linking G+ comments to my blog, and I’ve been grateful ever since. But if you passed up the offer, it’s not too late.

The first thing you need to do is set up your Google Plus account, if you don’t already have one. Rich Meyer explained how to do that in this post.

Then make sure you’re using your G+ profile for your blog. Google has posted helpful directions here. Note that if you have a bunch of info in your existing Blogger profile, it won’t automatically transfer over to your G+ profile – you’ll have to move all that stuff manually.

By the way, another cool feature of linking your G+ profile to your Blogger blog is that you get a widget in your blog’s sidebar called “Google+ Followers.” I have a lot more G+ followers than I ever managed to collect via Google Friend Connect, so seeing that widget makes me feel all important and popular and stuff.

Anyway, back to the matter at hand. Go to your Blogger dashboard. You should now have a Google+ tab there. Click on the tab, tick the box next to “Use Google+ Comments,” and you’re all set.

You can still moderate comments on your blog, even if they originated on G+. But you can’t go to G+ and delete the comment there.

Google has put together a FAQ for getting G+ comments to work on Blogger, and that’s the place to go if you have other questions about how it works or how to set it up. But for me, the process was quick and painless, and it has worked out great. I see a lot more traffic on my blog posts – and best of all, when people want to leave a comment, they can.

12 thoughts on “Adding Google+ Comments to your Blogger Blog”