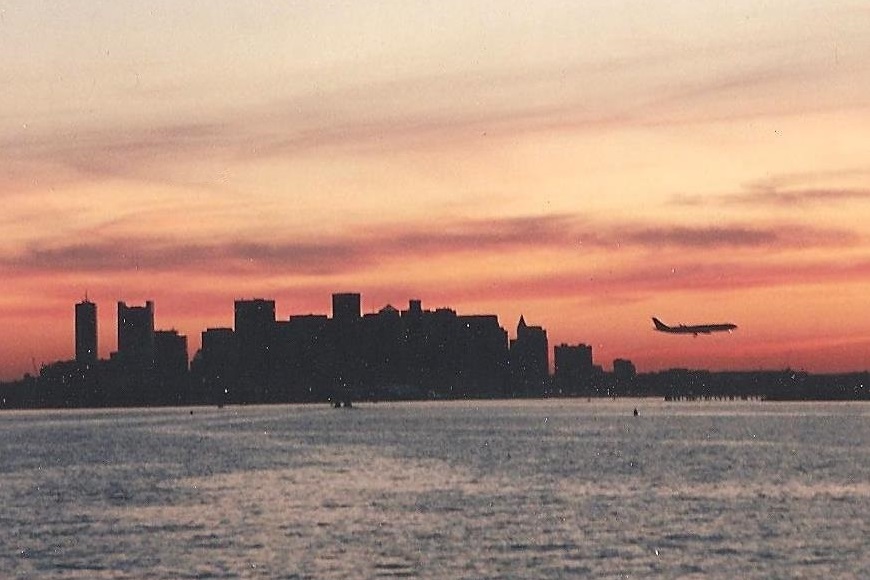 I left the doctor’s office completely numb. Once at the sidewalk, I took in a deep dose of Boston’s burnt, tinny air. The glass skyscrapers stretched up all around me. I had to blame someone, so I blamed the city.

Back at my office, I sat staring at my computer screen. All those years, working my way up to the top: none of that would help me now. My investment and retirement accounts were all useless. Retirement. Now that was a funny word.

I should quit my job and travel the world. That’s what people do, right? Some sort of bucket list thing – was that what I was supposed to put together? But I didn’t want a list of things. I wanted only one thing, and I’d wanted it all my life: to live in the wilderness. Life had gotten in the way of that dream. Pursuit of the almighty dollar and living comfortably had negated it. Maybe there was still time to find peace in the forest.

My entire body drooped with the realization that my whole life had probably been wasted. No wife, no children, no heirs, no legacy: what had I actually accomplished?

Not knowing where to start, I did what I always did. I turned to my computer. I clicked and scrolled and minimized and maximized until a curious headline caught my attention. Blue-eyed Cougar Kills Family. I gazed at it, then clicked through and read about the deaths of a woman and her two children out in a tiny town nestled in the wilderness of Washington State. The husband – the town’s Mayor – wasn’t home at the time, and returned to find an open door leading to a bloody massacre. A blue-eyed cougar was seen fleeing the house after tracking blood all over the scene.

The frown on my face gradually transformed into a smile. That was where I wanted to be.

I parked the rental car at the trailhead and followed the map drawn by the outfitter in town. Initially, he’d thought nothing of my questions about how to find the cougar. Plenty of people were out looking for it – there was now a reward for its capture, dead or alive. But as things progressed, I could tell the man thought there was something quite odd about a lily-white business executive heading out on a first-time expedition. To find a deadly cougar, no less. And without a gun.

Despite the frenzy caused by the cougar’s bounty, I didn’t see a soul. Law enforcement had warned people to stay away. Maybe they’d listened.

On the sixth day of my expedition, the pain was starting to take its toll. The prescription analgesics had managed to keep it at bay for the most part. But now I was tired and weak. Standing in a grove of cedars, I started to swoon. Their intoxicating, spicy scent was making me a little woozy. I knew I couldn’t make it back to the tent. My legs gave out. With a thud, I landed on the forest floor. The carpet of fallen, orange cedar leaves was not as soft as it looked.

I crawled to the edge of the grove and propped myself up against one of the trees so that I could look out onto a small meadow. Once I’d caught my breath, and my heart stopped pounding in my ears, I could hear the gentle rustling of the grass in the breeze. Intricate songs by birds I didn’t know danced through the air. When my eyes finally refocused, I could see wildflowers of blue and gold and fuchsia and white peeking out through the blond grasses. Their sweet aromas comingled with the cedars to soothe me. And the sun – one ray of its warmth shone down upon me through a gap in the tree’s branches. I hoped that heaven would be this wonderful.

Maybe if I just rested here for a while – maybe I could regain some strength. Maybe then I could reach behind me and get into my backpack for some protein bars and water. Yes…a little bit of rest would be good. 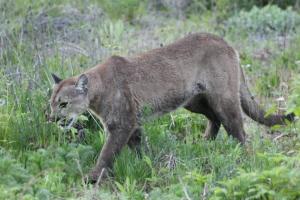 Without warning, he was there. His eyes were indeed an otherworldly blue. He seemed gigantic. My heart started racing. This was what I had been waiting for. Why wasn’t he attacking?

The big cat just stared at me with an almost thoughtful expression. I was in awe of his perfection: for certain the creation of a deity. The smooth lines, the white whiskers jutting from the black nose, and the tawny fur had all been arranged into this magnificent feline. And there he was, no more than ten feet from me. How could I provoke him?

I tried to gently clear my throat, but I coughed instead. Phlegm surged up into my mouth, but it tasted more like blood. I swallowed it back down, then said, “Uh, Mr. Cougar, I um – well, I was hoping you would kill me.”

He squinted slightly; the black and white whiskers which stuck out from his eyebrows twitched.

“Seriously. I need you to kill me. I can’t do it myself. I want my family to get my life insurance money. They don’t pay out for suicides. I know, I know, I was the invisible kid, but still. And I figured, you’ve killed three people already – that we know of. What’s one more?”

I got the feeling he was not going to cooperate. Panic started to take a grip. I couldn’t fail. He had to do it.

“Please, won’t you help me?” The stress of the situation was wearing me down. I felt a hollowness in my gut. It started to spread outward just as the cat approached.

“Well, I’ll be damned. It’s the blue-eyed cougar all right – what the hell’s he doin’?” was the next thing I heard.

“Cuddling with a kill?” a woman interjected with a hint of exasperation. “The cat is protecting him. Look at how it’s nestled under his arm. I don’t care what you say, that cat wouldn’t hurt anyone unless provoked.”

“No disrespect meant, Dr. Windwalker, but that cat wiped out the Remmer family.”

“Sergeant, I keep telling you, the cat would have dragged one of the children off for a meal. And the forensics people even said that the cat’s prints were on top of the blood spatter that occurred during the murder. You should be looking at Mayor Remmer, and not this cat.”

At that, the cougar slipped out from beneath my arm. The cops drew their guns.

“Don’t even think about shooting that cat,” the doctor nearly hissed.

As quickly as it had appeared, the cougar was gone. Dr. Windwalker knelt beside me. She pushed my eyelids open. “This man has been dead for nearly a week.”

“No. There’s not a scratch on him. I told you, Sergeant, that cat is not a killer.”

“Look, Doc, I respect the hoojeeboo legends of your people and all…”

“Excuse me, Sergeant, but he died of dehydration – and cancer. That’s not legend. That’s science.”

“How do you know it’s cancer?”

“The bluish tinge to his skin – and the medications in his tent.”

The sarge scratched at his cheek. “Well, I guess we better call off the bounty on the cat and take a better look at the Mayor.”

I felt a lightness. Completely by accident, my life had made a difference.