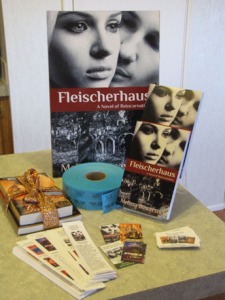 There have been several excellent guidelines posted here in IU about book signings. To mention a few: K.S. Brooks (1), Brooks (2), Storey,  Wyer, and Hertzberger.

If you’ve been taking notes, you’ve probably noticed that book signings can be wildly different depending on the venue, the time of day and the planning. You may have also figured that book signings can require a lot of effort and may show little in the way of monetary payoff, but the fact is they can be invaluable for getting your name out there and may result in sales spikes after the fact.

I recently did a book signing and felt it was very successful, so thought I’d share my experience here.

I live in a small town with no book store. (I know; hard to imagine, but it’s true.) I wanted to have a signing for my latest release but couldn’t think of a good venue. Finally I remembered a small gift shop that had recently opened. The owner had a corner coffee bar and a few tables and chairs and encouraged a very social atmosphere in the shop. She obviously wanted people to think of her store as a gathering place to stop and chat as well as take in her latest items. I approached her with my idea and she jumped at it. She’d been thinking about doing some sort of “special events” at the store, but hadn’t quite worked out what that would look like. It sounded like my plan would be the perfect way to launch her plans. We quickly hashed out a date and a time, just about a month out, then I started to work.

After appearing at several book festivals, I had discovered an important truth. Most people are afraid to approach someone who is selling something, because they fear they will be button-holed and harangued mercilessly until they buy whatever is being sold. Because of this, I’ve made it my standard operating procedure to offer them something free. Not only am I not immediately trying to get money out of them, I am giving them something. I always print up plenty of bookmarks in color on heavy card stock. I make some of them describing a single book and others with several books on them. I’ve had many people request extras, since there are a few different ones.

I also create magnets. These are great crowd-pleasers. I print out business card-sized pictures of my book covers, again on card stock, and attach them to sticky-back magnets. I don’t know what it is, but people love magnets. Again, I will often get a request for extras because I have so many different ones.

Finally I decided to have a raffle and give away prizes. I created two different book bundles, one “ghost pack” of my two novels that are ghost stories, and a “romance pack” with two novels that are historic romances. I signed all books beforehand and then tied each of the packs up with glittery ribbon so they looked beautiful. My book signing was going to occur from 10am to 12:30pm, so I decided to have one raffle drawing at 11am and one at noon. I made up a sign with all the details, including exactly what time I would draw and what prize would be awarded when.

Getting the word out is all-important, of course. If nobody knows about it, nobody will come. Here’s what I did to get as much exposure as possible.

-Flyers: I worked up a full sheet color flyer that included a picture of the book cover, a picture of me, the particulars of date, time and place, a short description of the book and a mention of raffles, prizes and giveaways. I posted these on every bulletin board I could find, asked business owners to display them, took them to book stores and libraries within a 30-mile radius. Because my new novel was about reincarnation, I also took flyers to every holistic, metaphysical or crystal shop/store/market I could.

-Press Releases: I worked up a press release with all the above info and sent it off to all the newspapers in my area. When I got personal responses from a couple of reporters, I sent them the color flyer as an attachment. I was lucky in that one reporter not only ran notices in the paper in the weeks running up to the event, but also came down to the event and took pictures and interviewed folks who were there for a follow-up story in the paper.

-TV Appearance: I was lucky enough to schedule a 10-minute TV appearance on a local TV station about 10 days before the signing. I did an in-depth interview about the book and mentioned the signing on air.

-Stuffers: I shrunk the flyer down to two on a page and printed lots of them in black and white. After cutting them in half, I took them to the store owner and she used them as stuffers, putting one in the bag of every customer who bought anything in her store. She also kept some of the color flyers on her counter and in her window.

-Radio: I found a website that allowed me to enter my event into the local regional calendar and it was thereafter broadcast on several radio stations. I heard from friends that they had, in fact, heard about the event that way.

-Invite friends: Having a few friends show up does two very important things. It creates the social atmosphere as you chat with them, and it breaks the ice for strangers when they see you are approachable and fun-loving. It immediately sets the tone of the event as a friendly, social get-together as opposed to a selling opportunity.

-Recruit the Venue Owner: The woman who owned the gift shop was very enthusiastic and excited about the book signing, which was a huge benefit to me. Early on I gave her a copy of the book to read if she wished or just to display. This way she could answer questions about the book and show it to people who were planning to come to the signing. (Some of her patrons wanted to buy the book before the signing, then bring it in for me to sign, but I decided against that.  I didn’t want to have to keep track of who had paid for the book before and who had not.)

I kept a running list of things to do, buy and create for the day. I was glad I started the list early on, because it got longer and longer as the date approached! Here are all the things I brought with me to the signing. (Felt like I was moving in!)

-Chairs: I brought two chairs, one for me and one for my lovely assistant who was going to keep track of the money and the books sold. (He’s also my pack mule.)

–Raffle sign: Just a single sheet of paper with color graphics, the time of each drawing and the prize for each.

-Payment sign: The price of my books (I usually keep it simple and just make them all $10 each, no tax) and the forms of payment I can accept. I’m not set up for credit cards, so take cash or check only.

-Bookmarks: I put one in every book sold, but offer free ones to any lookers.

-Magnets: I put one in every book sold, plus offer free ones to lookers.

-Business cards: I keep these out on the table for anyone who wants to look me up later online.

-Pens: For people to write their name and phone number on the raffle tickets, and for check-writers who aren’t well prepared.

-Receipts: Just in case anyone needs a receipt, I keep a few simple forms handy.

-Raffle tickets: I bought a roll of 1,000 tickets at Office Max. They’re the two-part style so the customer keeps half and puts half in the container I draw from.

–Container for raffle tickets: I used a clear plastic canister.

-Raffle prizes: I keep these out on the table so people can see what they might win.

-Candy: I put a bowl of candy front and center on the table. I thought about baking cookies, but decided it was safer to stick with store-bought, wrapped candies that can’t be tampered with.

-Bowl for candy: see above.

-Bags: I brought a bunch of extra grocery store bags just in case anyone wanted a bag for their purchases. (No one did.)

-Poster: I had a 12”x16” poster made of my book cover and placed it on an easel behind my table. It looked very cool.

-Table cloth: A nice tablecloth looks good plus can hide all the under-the-table boxes and supplies.

-List of books sold: I wanted to keep track of which books sold, so had a list made up that my husband could tally as we went.

-List of names if run out of books: I was worried about running out of books, so brought some pre-printed sheets where people could sign up if I needed to order more books and get them to them later. (Luckily or unluckily, I did not run out of books.)

-Cooler: I brought a small cooler with bottles of water and a few energy bars, just in case. You may not need this in most places, but in Arizona in summer, packing in water is de rigor.

I had my table set up just inside the door but off to the side. I noticed right away that folks would come in, see the table and my books, and steer clear. Yes, they were worried that I’d attack them, grab their wallets and purses and steal every dollar they had. To alleviate that fear, the first thing I did was greet them and offer them free raffle tickets. I let them know when the drawings would be and what the prizes would be, and also told them I had more free treats at the table. Once they were willing to enter the raffle, it was a simple matter to direct them back to the table so they could fill out the tickets. And once they knew I was not going to try to hard-sell them right away, they were more comfortable browsing the table and asking about my books.

I of course had my latest book front and center, and had the large poster of the book cover behind me. But I also had a few copies of my other books, as well. I write multi-genre (paranormal, romance, fantasy, adventure, etc.), so I always tell people I have something for everyone! Most of the people who came bought one book, several bought two books, and a few even bought four books!

-Offer freebies up front: As above, this takes the pressure off immediately.

-Stand up and walk away from the table at times: Sitting behind a table keeps you separate from your readers. Meet them on their territory and mingle, letting them know you’re human.

-Encourage a social atmosphere: Posting the times of the raffle drawings encouraged people to hang around, and the chairs and tables in the store made it comfortable. It was a much more fun event than a stand-in-line, get-your-book and leave sort of thing. There was a lot of conversation going on, both about my books and about other things as well. Again, it felt much less like a selling event, more like a party. I think everyone had a good time. (Oh, and I did sell quite a few books.)