An author in one of the writers’ groups in which I participate posted that she had a book signing at a store and no one showed up. She was very disappointed, and I can understand that. Who wouldn’t be? But she, and you, need to realize that this kind of thing happens all the time – it’s completely common for writers who have yet to become a household name.

At my first book signing, I expected to have a line – albeit small – because there had been so much press leading up to it – people had to be curious, right? Wrong. A few people did show up, and I did sell a few books – but there was NEVER a line. I directed a lot of people to the Harry Potter books and the food court, as I mentioned in my previous post. (Book Signing Basics Part One)

All is not lost, however. A book signing or other event is the perfect excuse to do a broad press campaign. Every news outlet in your area should have received a press release and/or announcement with the details of your upcoming event. No one who reads the news story will know if no one shows up – and at least that way your name got out in front of a lot of potential readers. So always, always press the heck out of your event beforehand. If not for the event, then for yourself – how many opportunities do you have to make the news for the same book?

As far as no one showing up – you can’t take that kind of thing personally. This author was under the impression that the store would share in advertising the event since that had been her experience in the past. She’d been quite successful and pleased with a recent signing at a library. But libraries are different – they have people dedicated to events and publicity. They have public programs and relationships with the news media. Book stores may or may not – and they probably won’t do any press for you. Luckily this author didn’t slack and did a really good job pressing the event. Her releases were published in a number of papers. In my opinion, that’s a win.

Since you will pretty much be ‘on your own’ – take the initiative. Print up some flyers or posters announcing the signing and bring them to the store a couple of weeks in advance. These don’t have to be fancy – just a photo of your book cover(s), a photo of you, the date of the signing, and maybe “Meet the Author” across the top. Make sure your name is in a large font, too. Name recognition is everything. Have the management hang them up in the store. Leave book marks on the counter. If there are any bulletin boards in the area – gas stations, community centers, convenience stores – hang those flyers there as well. People do stop and look.

Why won’t people come up to your table? People are weird. Many of them don’t like to go up to authors at signings. They feel like you’ll pressure them into buying your book. They feel like if they talk to you they SHOULD buy your book. People don’t want to feel guilty. Tomorrow, you might sell a lot of books because you were there today. 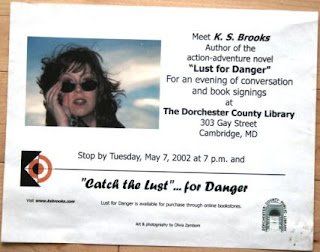 “Sure, Brooks, you’ve got eight titles. This kind of thing doesn’t happen to you.” Well, I didn’t always have eight titles. I started out with one. In fact, I was very nervous this exact thing would happen to me. I’d been selling on average no more than FIVE books per signing. Then came my first signing in urban Virginia. There really hadn’t been any press on me in that area since it was more than two hours from where I lived – and it was no little farming town, either. No one in this densely populated city knew me or even cared to know about me. I’d spent SIX hours driving around the weekend before the event hanging my flyers everywhere I could find a spot: bus stops, gas stations, restaurants, telephone poles at intersections – you name it. Now that I think about it – it was kind of pathetic. I didn’t know the area and I wanted as much exposure as possible – so at the time it seemed like the right thing to do. I was scared to DEATH that the book store would think I was a total loser if no one showed up. It was a big chain and I really wanted to make a good impression.

Then, I got an idea. I can be pretty wily when I want to be. I called a couple of friends. I arranged with them to come to the signing, stop at my table, and I would slip them twenty dollars with a bookmark so they could go to the register and purchase a book. Expensive, right? Well, yes. Stupid, right? Well, as it turns out, no – it took SO much pressure off me that I actually enjoyed my signing.

Another thing I can’t stress enough is to have something interesting on your table to draw people over. Since people are weird – it’s so important to have an icebreaker. Pick something key (or not-so-key if it’s tough) in one of your books and put it up there. If you’re like me, you probably already have it for research or inspiration anyway (or just because you’re warped). Even though grenades aren’t used in my books, I have three different types. I used to set those out. Fantasy authors can put out big sparkly crystals – history authors can put Civil War figurines, etc. – go as big with stuff as the book store will let you. The key is to make people curious enough to come over and talk to you. If you can get someone to come up to your table, people will see you don’t bite and that will encourage others.

Depending on the store, you may be allowed to put out food – cookies, candy, whatever. Everyone loves free food. I’ve seen some people detour just to get it. If it’s a treat that has some sort of relevance to your book – even better.

So, don’t get discouraged – it’s just the lumps you take starting out. As long as you give it your best shot – it never counts as a loss.

K.S. Brooks is an award-winning author and photographer, and Co-Administrator of Indies Unlimited. For more information, please see the IU Bio page and her web site: http://www.ksbrooks.com/