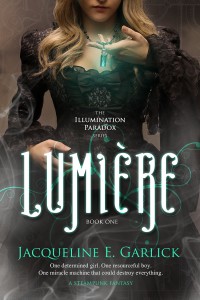 After an unexplained flash shatters her world, seventeen-year-old Eyelet Elsworth sets out to find the Illuminator, her father’s prized invention. With it, she hopes to cure herself of her debilitating seizures before Professor Smrt — her father’s arch nemesis — discovers her secret and locks her away in an asylum.

Pursued by Smrt, Eyelet locates the Illuminator only to see it whisked away. She follows the thief into the world of the unknown, compelled not only by her quest but by the allure of the stranger — Urlick Babbit — who harbors secrets of his own.

Excerpt from LUMIERE by Jacqueline Garlick:

“Wait!” I shout, surging forward, shouldering my way through the crowd. I fight my way to the front and pound on the doors of the carriage. “Please!” I shout. “I need to speak to you!” But the stranger doesn’t hear.

He brings his whip down hard over his horse’s back and the carriage leaps forward, parting the angry crowd like soil in a furrowed field. “Wait!” I hoist my skirts and chase after the carriage. “Please!” I shout. “Please! Wait!”

A second crack of the whip and carriage moves faster. I race on, struggling to keep up to its side. If I lose sight of this carriage, I’ve lost everything. All hope of ever leading a normal life.

I can’t let that happen.

He will not take my father’s machine.

“Please, I beg you, stop the coach!” I lunge, throwing myself at the back of the coach, barely catching a toe on the edge of the running boards, embedding my nails into the carriage’s seams. The carriage bursts forward through the streets of Gears, the city fast becoming a memory.

“Stop!” I plead as my boot slips from the running boards. I swing out to one side and dangle by one arm.

The stranger at the mount turns his head. “What are you doing?” he shouts. “Get off!”

I kick my way back up onto the platform.

“I said get off!” he shouts again.

“I won’t!” I say, hoisting, myself up higher onto the cab.

My foot slips again and I sink beneath the rooftop, striking my chin hard on the way down. Grasping at the coach’s seams, I desperately try to hold on, the toes of my boots burrowing twisted trenches in the dirt road below. My heart lodges in my throat as I lose my grip and swing out again to the opposite side.

His face appears over the top of the cab seconds later. His eyes are lit like flares.

I hang by the tips of my fingers, shocked, staring up at him. I don’t know whether to cry or scream.

The face of a monster stares back at me, framed in a mop of curls darker than a raven’s wing. His skin is ghostly white, marred by raised and purpled bruises. One, in the shape of an open-mouthed snake, devours his face—while the other, a purple hand, wrings his neck. He stares back at me through eyes as pink as a rabbit’s. A single lock of strange pure white hair cascades down over his left eye. I’ve never seen anything like it. Not even in a book. It’s as though he’s escaped a freak show.

“For the love of God,” he cusses, teetering on hand and knee, then disappears, only to reappear a second later, the reins clenched between his teeth. “Give me your hand!” He reaches for me.

My heart staggers in my chest, my eyes still shamefully glued to his startling face.

My fingers slowly begin to slip from the seam; my heart squirrels into my throat.

“You are in no position to be negotiating, now take my hand!” the stranger insists.

I drop my chin, surveying the speed of the terrain rolling beneath my feet. “Up,” I say, turning my chin toward him.

“Rational choice,” the stranger says. “On the count of three. Ready?”

The carriage hits a bump, tossing him haphazardly off to one side. “Confounded!” He struggles. The horse spooks, picking up speed, ripping the reins loose from the stranger’s teeth.

My stomach sinks as his grip slips, then re-tightens around my knuckles, his legs floundering dangerously over the edge of the coach. He’s sprawled on his back, kicking and flailing until at last he thrusts into a roll, flopping onto his belly again.

“Three!” he shouts, not yanking me up, but swinging me out and around the end of the carriage, kicking the side door open with his boot. Before I’ve had the chance to object he casts me deep inside the dark belly of the coach, slamming and locking the door behind me.