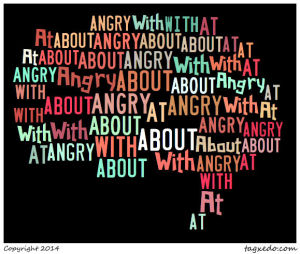 Have you ever paused at the word ‘angry’ and wondered whether it should be followed by ‘with’ or ‘at’ or ‘about’?

A good rule of thumb is: you’re angry with a person, but angry at/about a situation.

I was angry with my son because he broke my favourite vase.

I was angry with King Arthur because he left my cakes out in the rain.

He was angry about the situation in Iraq

He was angry at the way the dog had been mistreated.

You can also be ‘angered by’, but this is similar to about/at, in that one is angered by a situation rather than a person.

She was angered by the lack of response to her party invitation.

She was angered by her daughter’s unwillingness to help her with the chores.

However, language evolves, and consequently, ‘angry at’ for use with a person isn’t necessarily wrong and is becoming more acceptable.

I find to avoid any confusion or doubt, it’s simpler to keep ‘with’ for people and ‘about/at’ for things. You could, of course, avoid the problem altogether and ensure that your characters are always happy and never angry about anything at all, and the world of fiction would be a peaceful and calm place. (Nah, that really would be pushing the imagination!)