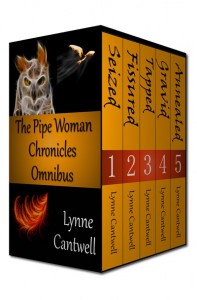 Once you’ve written a series, one of the things you can do is promote the books as a set. You can do this in one of two ways: 1. by lowering the prices on each book individually; or 2. by putting some, or all, of them together in a single file and calling it an omnibus or a box set.

I would have had to charge upwards of $20 per copy for the Pipe Woman Chronicles Omnibus if I’d gone the dead-tree route. But as an eBook, it’s doable, and not much more difficult to format than an individual book. Basically, you open a new document; create (or copy, paste, and edit) your front matter; copy-and-paste the text of each book in the series into your new document, using a “next page section break” at the end of each book; create (or copy, paste, and edit) your back matter; and save the file. Poof, done.

There are, however, a couple of quirks, and one of them involves the dreaded table of contents. All the bookmarks and hyperlinks in your original book files have been copy-and-pasted into your new document, so you are going to have to go through the whole thing and fix those links. I would recommend deleting all of the bookmarks and hyperlinks in the omnibus document and creating new ones from scratch. My books aren’t that long, so when I set up the ToC in my box set, I link to the first page of each book instead of to the individual chapters. If you decide to link to chapters, you will need to get creative with the names of your bookmarks, in order to differentiate among all of your various Chapter Ones and so on. (Here’s a tutorial on making ToCs.)

You can include your original covers inside your omnibus, but it will increase the size of your file – maybe to the point that it will be too big for KDP.

I’m guessing you’ve seen those cool 3D covers for box sets. I make mine in GIMP, using Filters – Map – Map Object. Getting the filter’s settings just right takes a little playing around, but you can always hit undo until you’ve got your box looking the way you want it to look. (I can write a tutorial if you guys are interested. Let me know in the comments.)

One other thing: You’ll need to write a new blurb for your box set. And if you think it’s hard to write one for a single book, try writing one for a whole series. One thing I do is include lines from reviews of each of the earlier books in the blurb for my box set. 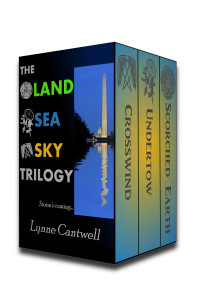 I’ve created two box sets: The Pipe Woman Chronicles Omnibus and The Land Sea Sky Trilogy. Like everything else in my life, I’ve done them backwards from the way I probably should have done it – I have the individual books at both Amazon and Smashwords, but the box sets are enrolled in KDP Select. It’s not as dumb an idea as it sounds. Both of my series are urban fantasy, and they’re both set in the same universe. I thought that if I gave one of the sets away for free, or put it on a Countdown for 99 cents, I’d get the attention of readers who like box sets – and they might buy my other one, too, even if it’s not on sale. To encourage this, in the back of each box set, I include the first chapter of the first book of the other series.

I’ve heard reports third-hand of Amazon coming down on authors who have put some, but not all, of their books in a series in Select – i.e., if they’ve put the individual books in Select but not the box set, or vice versa, the titles in Select will get kicked out. So far, the Zon hasn’t come after me (fingers crossed that they’re not reading this…). I think you can get around it by having a percentage of new material in your omnibus file. I write a new author’s note and include a sample chapter from a different book, as I said above; maybe that’s enough. Or maybe I’m too small a fish for them to bother with. I guess we’ll soon find out….

17 thoughts on “The Anatomy of a Box Set”