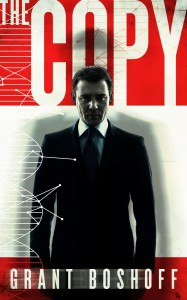 Ambitious geneticist Geoffrey Bartell is fighting for his life. His company is under legal and political attack while his marriage crumbles around him. Desperate to recapture his once idyllic life he comes upon the perfect solution by creating a copy of himself, and together they set about picking up the pieces.

But the perfection is short-lived as the two’s priorities begin to diverge. As the jealousies and resentments build, Bartell comes to realize that while living alone was difficult, living as two may be impossible. Things take a dark turn and before long Bartell finds himself at the center of a criminal murder trial in which he now must fight to salvage what life he can.

The Copy is available on Amazon.com and Amazon UK.

Exclusive excerpt from The Copy by Grant Boshoff

DISTRICT ATTORNEY ALTON MCBRIDE buttoned his jacket and prepared to enter the courtroom. Through three days of testimony he’d constructed an almost impenetrable case. Almost impenetrable. The ‘almost’ is what frayed his nerves: the single inescapable fact that the victim remained unidentified.

As he reached for the filigreed brass door-handle his phone vibrated. Turning away from the doors he slipped the device from his inside coat pocket and glared at it. The screen showed Jon Cramsdell, his deputy investigator. “Tell me something good, Jon,” he said, “and make it quick; I’m in court in one minute.”

“We ran the victim’s prints and DNA through the databases again, like you asked, Chief. Still nothing.”

“Alright, Jon. Thanks for trying.”

“Chief, there is something else though.”

Alton watched a group of reporters file into the courtroom. He glanced at his wrist-watch. “What is it?”

“We finally traced the car.”

Alton’s mind spun but came up blank. “What car?”

“The Mercedes. The one the butler reported having seen in the driveway earlier that evening. Turned up parked in the garages. The cops overlooked it assuming it belonged to the family.”

“We’ve no time for a subpoena. Tell me you got a name out of the agency voluntarily?”

Adrenaline surged into Alton’s bloodstream. He felt it as a flutter in the stomach and a tremor in the hands. “Who is it?”

Jon hesitated. “Not sure you’re going to like it-”

“The order was placed by a GenLabs clerk three months ago, on their corporate account. But the car itself was picked up and signed for by Geoffrey Bartell the Third.”

“That’s what they’re telling me.”

“That makes no sense.”

“I know, Chief. The guy has a stable of million dollar rides, what the heck would he want with a middle class sedan like-”

“Jon!” Alton interrupted. The man was a keen investigator but had a tendency to ramble on. “Have you seen the records with your own eyes?”

“On my way there now. ETA ten minutes.”

Alton stabbed the end call button and dropped the phone into his pocket.

What the hell had Bartell been playing at? The man held secrets, of that there was no doubt. But James Scott May would never put his client on the stand. No defense attorney worth his salt would do so. Not in a capital murder case.

Alton took a long, steadying breath. Then he straightened his tie and turned back towards the courtroom doors.

It wouldn’t stop Alton from sending him to the chair for first degree murder.