I’ve been interested in making a book trailer for a while, so I was intrigued when K.S. Brooks told me YouTube had a completely online video maker that was FREE. See, FREE gets me every time. (Sorry). I thought I’d test out YouTube’s video editor, and what I’ve discovered is that it’s doable, but it’s not a simple plug-and-play system with no hitches.

The first thing I did when Brooks told me about it, was go to the editor home page to get started. You need to be logged in to your Gmail or YouTube account for the link to work (Google owns YouTube and gives you a YouTube channel when you set up a Gmail account).

The page you’re taken to has very few words on it, mainly just icons, and you have to figure out what they mean. This didn’t go so well for me, because the icons make it seem like you already have to have video or audio segments recorded in order to use the video editor. However, that’s not true. You’ll be able to upload single images to create your video, and YouTube has free music tracks you can use to score the book trailer.

Since the page has so few words, I tried to break down the page with the image below. 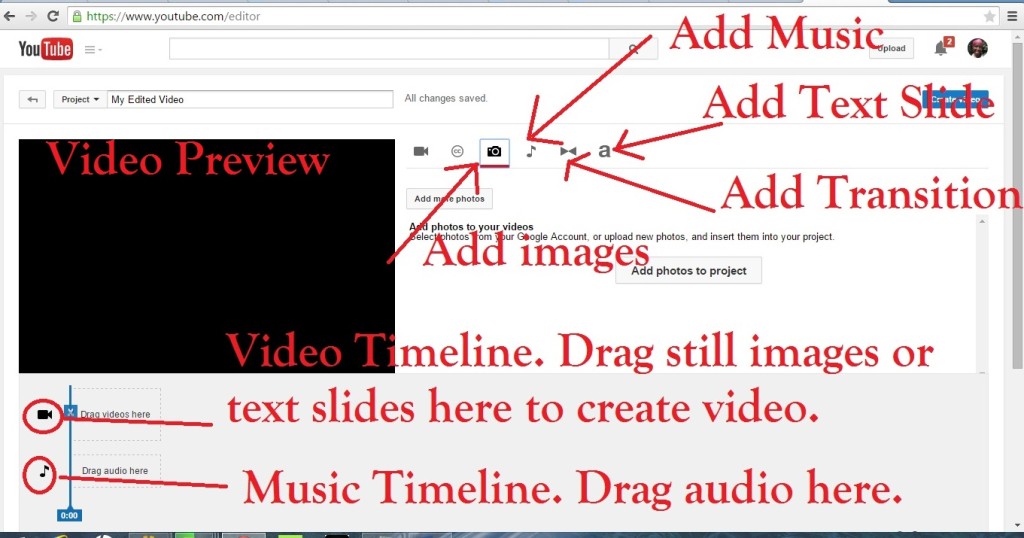 Unfortunately, the image is a bit crowded, so I’ll do a quick overview. The page is divided into three sections. (1) The upper left has a video preview pane, where you can preview your video as you build it. (2) The upper right has six icons that allow you to add content to your video. The icons (listed in the order they appear from left to right) allow you to add already completed video segments, closed captioning, images, music, transition slides or text slides. (3) The lower section of the screen includes your video timeline and audio timeline. You build your video by dropping in two or more of at least one of the following items: completed video segments, images, text slides, or transitions in the order you want them to appear in your final video. So you can add several still images or several videos or several text slides, or some combination of them. You can easily rearrange the order of your video by moving video segments around on the video timeline. You drop audio in the audio timeline the same way.

Now that you know where everything is, we can start creating a video. The first thing you’ll want to do is pick a soundtrack. YouTube has several free tracks you can use without worrying about licensing or copyright issues. Click the music icon on the upper right section, select a genre, and then select a tune. This will probably take you the longest, as you’ll have to listen to several of the music tracks before finding the right one for your book trailer.

Once you have the music, drag the track down to the music timeline. If you just want one song, you’re set. If you want multiple songs, pick the next song and drag it to the audio timeline, placing it after your first song. Keep doing that until you have all the songs you want on the audio timeline. For the moment, we’re done with audio. For those with multiple songs, we’ll come back to audio after we finish the visual segment of the video, so you can adjust the length of time each song plays.

This is a good place to mention that THERE IS NO SAVE BUTTON in the YouTube video editor. After you make a change, the top of your screen will say, “Your changes have been saved.” You just have to trust them on that, because there’s no external button for you to press to ensure this has happened.

Now it’s time to compose the visual part of your video. This was the trickiest and most frustrating part for me.

I decided to do a video that was mainly text by using YouTube’s text slide feature. To create a text slide, click the text icon (“a”), and drag your text slide into the video timeline. Once the slide is in the timeline, you can change the text (including font and size). 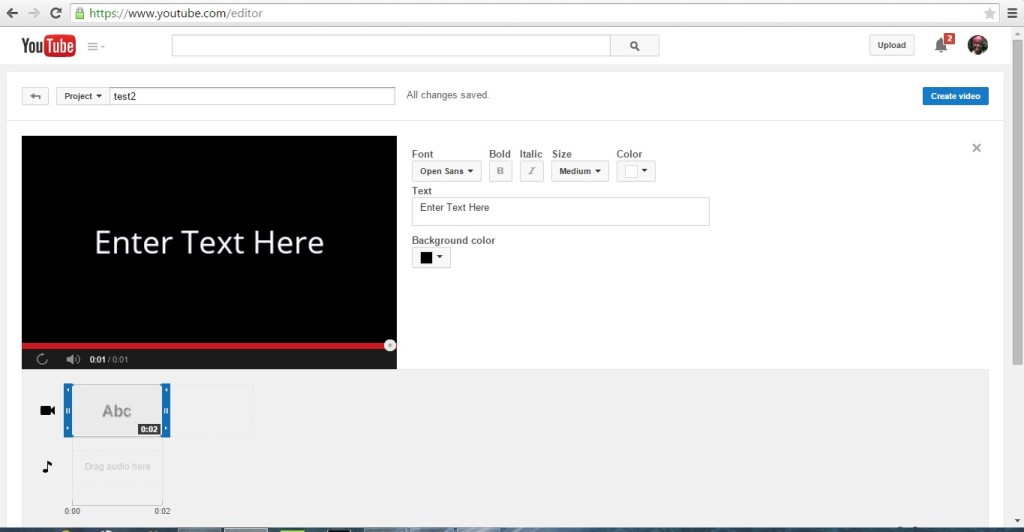 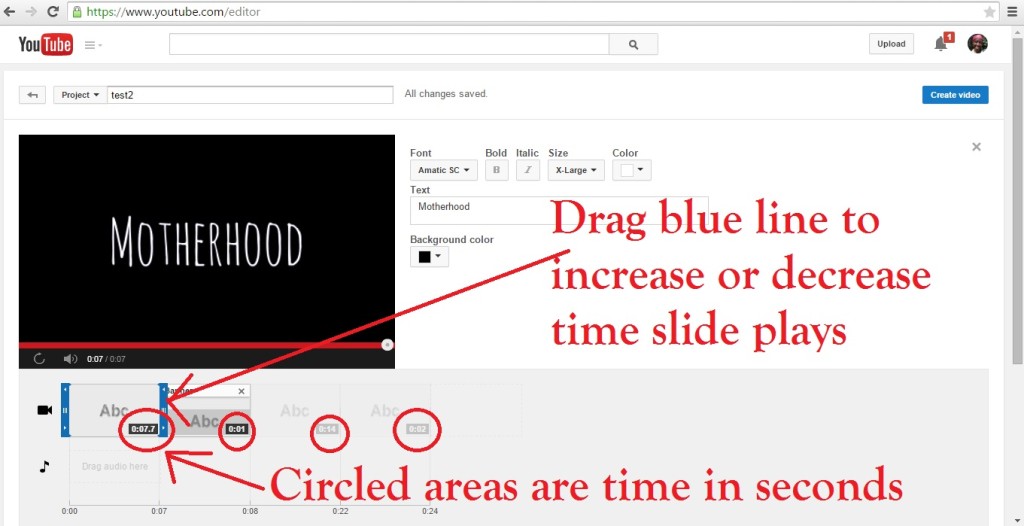 I dropped several text slides into the video timeline, watched my video unfold in the preview area and was really happy. 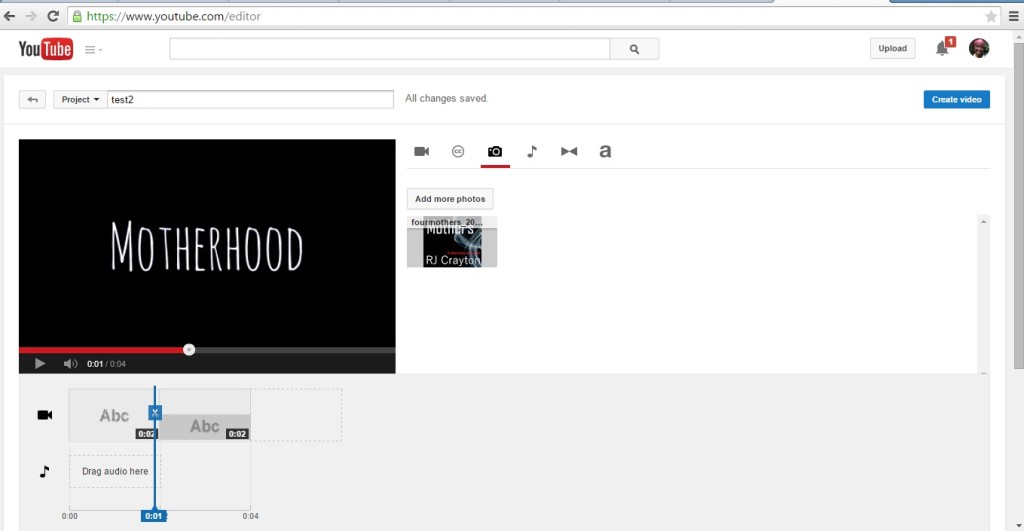 Then, I uploaded my book cover as an image and placed it as the final video slide. To upload a picture, just click the picture icon, and it will ask you to select the image file you want to include. 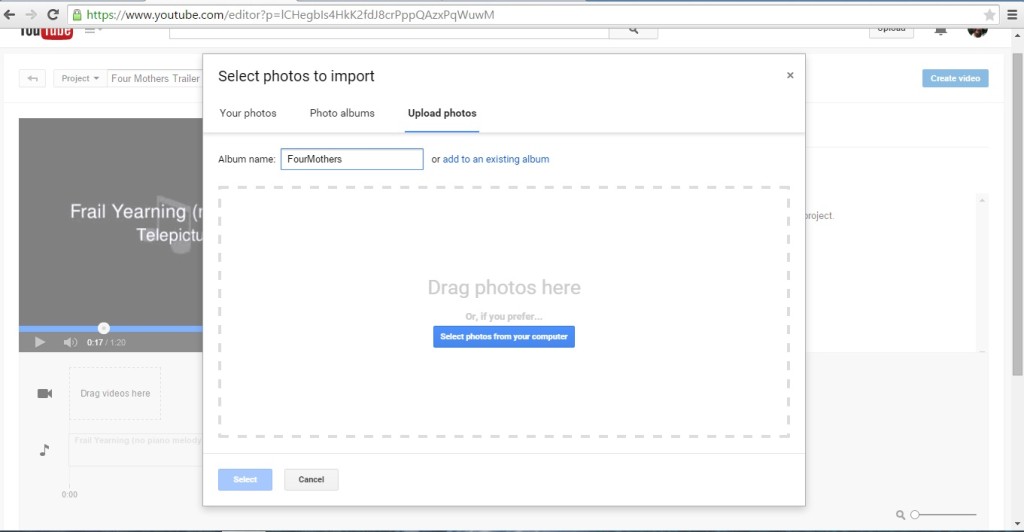 My book cover had smaller dimensions than the video window. No big deal, right? Nope. Big deal in YouTube’s video editor. After adding the book image to the video, stuff (you can imagine what) hit the fan. The video only showed part of the text on the text screens. The part of the text shown was limited to what would fit within the horizontal dimensions of my book cover. 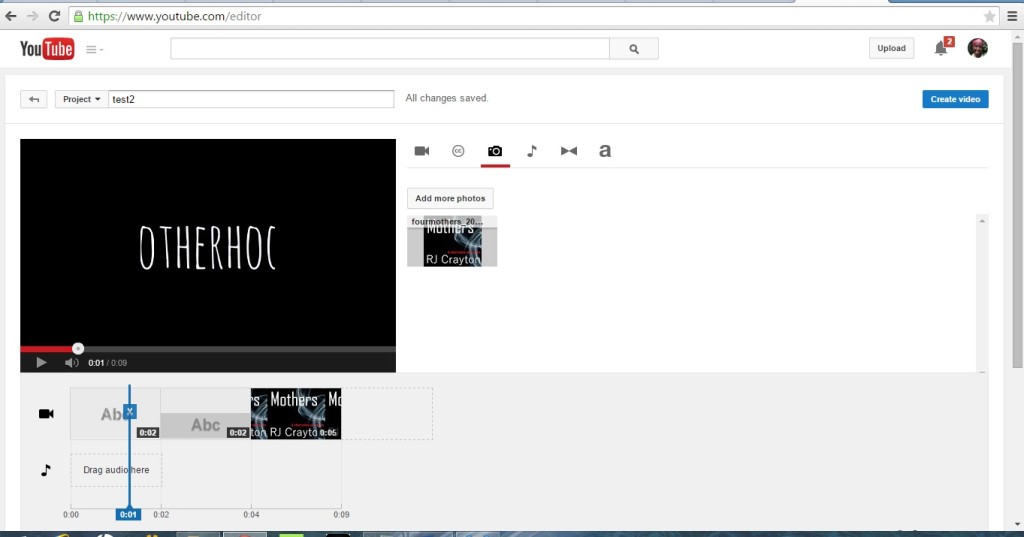 I deleted my book cover from the video timeline (click the X in the corner of the slide on the video timeline). Then, all my text slides went back to normal. I thought that perhaps my video went awry because I tried to use the book image as the last slide of the video. So, I stuck in an extra slide for the final one and re-added my book cover image so it wasn’t the last slide. No dice. It still cut off the text. At this point, I told Brooks that YouTube video editing sucks.

However, I’d already done most of the video and didn’t want my time go to waste. I deleted my book cover image once more and then decided to find out the dimensions that YouTube wanted for videos and make an image to fit those dimensions. I figured if the image was the same dimensions as the video player, it would keep my text intact. Google told me YouTube videos have an aspect ratio of 16:9, so I spent 10 minutes using Gimp to make an image that was 1600 pixels wide by 900 pixels tall.

I uploaded that image as the final slide for the video and BAM, everything worked perfectly. On a whim, I decided to try one more time to place the single book cover image in the video timeline as the second to last slide. This time, the video played properly. No cut off text. The best I can determine is YouTube decides the text slides you create will only show text to fit in the dimensions of your largest image. And that’s just a guess, as I got no guidance from YouTube.

This glitch is definitely problematic, because it means you have to go through and create images that have the right dimensions. You can’t just find several nice images you like and slot them in the video. If you want images and YouTube created text slides, you’ll have to create at least one image that has a 16:9 aspect ratio.

Once you have all the visual aspects of your video in place, hit the video icon and it will play the video in the preview screen. Is it how you want it? If so, good. If not, tinker with it until you get it right. To change the time audio plays, drag the edges of the audio segment until it fits your needs. Those of you who have multiple tracks will need to make sure the audio matches with your imagery.

After you get the video the way you want it to look (based on the preview), click the blue “Create Video” button (upper right). When I created my video, YouTube gave me a message saying, it might take a while to convert the slides/music into a video.

It took about 10 minutes, and then my video appeared on my YouTube channel. Beneath the video is an area for the author to caption the video. In the caption section, I included links to where people could buy the book. By default, YouTube adds that you used its video editor to create your video. You can delete that if you want.

My video looked pretty good after I finished, but I realized I wanted the review quote section to run slightly longer. So, I went back in to edit the video and learned that I couldn’t. Yep. The slideshow style timeline I’d worked from earlier was now inaccessible because YouTube had turned it into a video. I couldn’t change the timeline. I could add new music or combine this video with other videos, but the content of the video couldn’t be changed — at least through no means that I saw.

Now that I know this, I think it’s important to make sure you’ve got the video exactly as you want it before clicking create video. That said, it’s a free service, so for free, it’s good because it allows novices to make a video with very little experience.