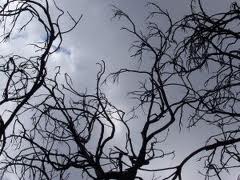 Your character is alone at night in the woods. Something terrible is about to happen. Are they being stalked? Are they about to make some gruesome discovery? Without telling me what happens, make my spine tingle and my skin crawl by setting the scene. Incorporating the image of the night sky through the naked tree branches, paint a scene that gets your reader prepared for coming terror.