Hi, everybody. This is to be my little neck of the woods here at Indies Unlimited, and I’m going to call the place “Casual Friday,” as I feel that will allow me to blather about the largest number of topics possible, sometimes until I’m halfway through a post. As a writer, I’m a “pantser,” see, so that’s pretty much “how I roll.” If anybody has anything they’d ever like me to opine upon, just say so, as I’ll probably be out of ideas by the end of this post. Like I say, “casual.”

So here’s how me and my muse spent the holidays.

She was there while I was spending time with family, not at the table but leaning against a wall in my line of sight, arms folded and legs crossed at the ankles. Staring at me. Occasionally drumming her fingers against the wall (she gets bored). Driving home, she rode passenger and flipped through radio stations. Not big on Christmas music, as they don’t have that where she’s from.

I had the week off from Christmas to New Year’s, which was great, except for her. See, I’d kind of decided to try and spend more time writing on a daily basis in the New Year (didn’t call it a “Resolution,” as I actually need to do it), so for that week I just sort of vegged-out. Napping on the couch, watching Bowl games I didn’t really care about. Through most of it, she paced around. Sighed. Sharpened daggers on a grinding wheel in the kitchen. Flicked a short-nailed finger against the carriage clock on the mantle. Sometimes, she stood in front of the TV tap-tap-tapping her foot while somebody was driving for a touchdown. 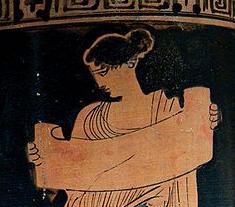 A few times, she took over. I’dsit still for a half an hour on the couch, eyes unfocused. Thinking things through. The Codian Empire is going to need a secure supply line into Chengdea…the mountain pass won’t cut it all year. What would they do about it? What are their options? I was re-reading John Keegan’s masterly The First World War one day, and spaced-out during the Gallipoli chapter. How do you seize a beachhead from the water in a Musket & Magic milieu? How do you defend one?

Sometimes it’s like that: She asks a question and I sit there for a while mulling it over. Often it’s more like a conversation. Sunday, New Year’s Day (so I *should* have been writing but it was the last day of the NFL season) I was in a bar with my Dad watching the Bears stumble toward mediocrity. She started in on me from the empty barstool on my left.

You know Heggenauer and Allison are going to shack-up, right?

Please. Re-read that last chapter. They are making the googly-eyes and having pregnant pauses.

“Dude, she’s the Princess of the Empire and he’s a priest of Jobe.”

Don’t call me “Dude.” And Jobe’s priests ain’t celibate, you said so in Book One. Maybe this is why.

“But that would complicate the hell out of the plot…”

I had to ask my Dad how Minnesota had just picked up a first down.

Monday, January 2nd, there were five bowl games on TV. Totally unfair. Went as far as opening a notebook (I draft by hand), but it sat on the kitchen table while I watched still more football. She cleaned her nails with an arrowhead and glared.

Tuesday morning, after that first big cup of coffee, I sat down in front of that empty notebook. The house seemed really quiet. “Hello?” Took up an Eberhard Faber “Mongol 482” #3 yellow pencil, realized I was reading the side of the pencil instead of writing with it, and touched lead against the Tyranny of the Blank Page for the first time in ten days or so.

She raised a dark, slashing eyebrow from across the table.

You sure you don’t want to watch a freaking basketball game or something?

“Sorry about that, but I needed the break. I’m back now. I’m ready.”