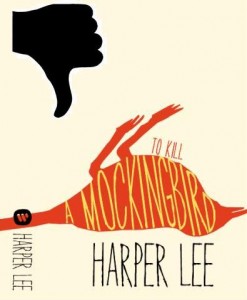 As I’m sure many of my fellow writers have noticed at the various and sundry virtual watering holes around which we are wont to gather, one of the more common posts (right after “Buy my book!”) goes something like “I just got an awful review!” usually expressed with varying degrees of “How could this have possibly happened?”

How could it not have happened? My advice on such occasions is always to pick one of your favorite books of all time, something you think of as an absolute, perfect gem. Then go to any review site and page through the one-star reviews, of which there will likely be hundreds.

What follows is a selection of excerpts from one-star reviews found on a popular site. I am not making any of these up, and I intentionally tried to find ones that are not “gags.”  These are real readers offering their real opinions of books they positively loathed. I’m not saying I totally disagree with all of them, but if you read through the list or look for a favorite (alphabetical by author), you’ll probably find at least one that will rock your sense of literary reality.

If these don’t cheer you up after you’ve had a “bad” review, and if you think nobody could possibly dislike your book while all these others are clearly garbage…you might not enjoy your career as a writer.

(not edited for grammar) 😉

“the story is terrible, the characters are completely uninteresting, and this idea has been overused.” The Hitchhiker’s Guide to the Galaxy, Douglas Adams

“It was about a bunch of rabbits which I just could not have cared less about.” Watership Down, Richard Adams

“I would rather read Twilight twelve more times than read this again.” Pride and Prejudice, Jane Austen

“The first major error in this book is its plot. It is just so tedious.” Fahrenheit 451, Ray Bradbury

“This bratty girl’s practically non-existent parents die. Then she feels bad for herself all the time.” The Secret Garden, Frances Hodgson Burnett

“Just people acting stupidly for no apparent reason except to be disagreeable.” Alice’s Adventures in Wonderland & Through the Looking-Glass, Lewis Carroll

“I had to stop reading such bad writing. The detective immediately started to overlook obvious clues.” Murder on the Orient Express, Agatha Christie

“The main character wasn’t likeable at all.” A Christmas Carol, Charles Dickens

“It more made me angry because of how it has been elevated, even more so now that it’s an Oprah book.” Great Expectations, Charles Dickens

“I knew exactly how the book was going to end, so I couldn’t bring myself to finish it.” Crime and Punishment, Fyodor Dostoyevsky

“I’m kind of a sucker for true crime. But UGH. BORING.” An American Tragedy, Theodore Dreiser

“This book is pointless. Nothing happens in the entire book.” The Great Gatsby, F. Scott Fitzgerald

“I think simply dropping a group of kids on a desert island does not in fact prove anything.” Lord of the Flies, William Golding

“The theme became repetitive and i got bored and had to put it down.” Catch-22, Joseph Heller

“I know there’s a good story in there somewhere but it gets lost in unending, ridiculous, irrelevant dialogue.”  The Iliad, Homer

“The existential plight of a man turning into a bug was utterly dull for me. “ The Metamorphisis, Franz Kafka

“The book is verbatim the movie. I wasn’t impressed.” One Flew Over the Cuckoo’s Nest, Ken Kesey

“This is the first book that I’ve read by Stephen King that isn’t about the Red Sox and I think King and I should stick to baseball.” The Stand, Stephen King

“I couldn’t get on with it. too Slow and doesn’t work as a whodunnit because we now have DNA evidence.” To Kill a Mockingbird, Harper Lee

“First, C.S. Lewis… is not a good writer, plain and simple.” Chronicles of Narnia, C.S. Lewis

“It was really bad and like everyone dies.” The Call of the Wild, Jack London

“No inner heart, no longing, no sense of people, of desire, of inner worlds and struggles.” One Hundred Years of Solitude, Gabriel García Márquez

“I really didn’t like how Eve was portrayed throughout the book or Satan for that matter.” Paradise Lost, John Milton

“Scarlet is a raging evil snarky miserable bitch and I hate her.” Gone with the Wind, Margaret Mitchell

“Did not like this book at all, if i could give it a less than 1 I would. This book is way to confusing and uses really big words.” 1984, George Orwell

“So the whole damn story can be boiled down to “popular kid gets away with doing what he wants”. How original.” Harry Potter and the Sorcerer’s Stone, J.K. Rowling

“It was filled with language and a lifestyle that was offensive to me.” The Catcher in the Rye, J.D. Salinger

“Lord, could Romeo be anymore of a girl? Obviously Juliet wore the pants in the relationship.” Romeo & Juliet, William Shakespeare

“Victor comes across as an extremely sad and hapless figure.” Frankenstein, Mary Shelley

“A book about miserable poor people.” A Tree Grows in Brooklyn, Betty Smith

“The dialogue was horrific. The story was bad. The ending was creepy, weird, and made me wonder what the heck it meant.” The Grapes of Wrath, John Steinbeck

“it is incredibly flowery, particularly strange given the “thriller” genre that it tries being a part of.” Dracula, Bram Stoker

“This is not a book, this is propaganda on a stick.” Uncle Tom’s Cabin, Harriet Beecher Stowe

“He never tries to look at things from someone else’s point of view.” Civil Disobedience, Henry David Thoreau

“What is seriously lacking in Tolkien’s world is any original idea or just imagination in general.” The Lord of The Rings, J.R.R. Tolkien

“This book is bloated old piece of crap. How this even got published in the first place is beyond me.” War & Peace, Leo Tolstoy

“A horrid book which was like every other book that takes part in this time period about a little boy who has an overactive imagination which just gets boring after a while and it amazes me that people can find pleasure in this incredibly horrible book.” The Adventures of Tom Sawyer, Mark Twain

“a storyline that never seemed to have a point.” Journey to the Centre of the Earth, Jules Verne

“Arachnophobia is real, and being forced to read this in 4th grade gave me nightmares for months.” Charlotte’s Web, E.B. White

“There is almost no action, and way too much talk.” The Picture of Dorian Gray, Oscar Wilde