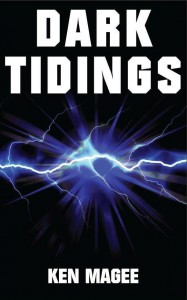 Today we get a sneak peek of author Ken Magee’s novel, Dark Tidings:

What happens when ancient magic meets the internet? One thing is certain, modern life will never be the same again.

In the medieval mists of time a young thief, Tung, and a disgraced wizard, Madrick, are thrust together in an executioner’s dungeon. In the darkness, Madrick reveals an incredible secret about a legendary spell. The great spell helps them escape their prison cell… and eventually their century.

Catapulted into the present day, their lives collide with Michael, a computer hacker who plans to destroy the world’s largest bank. But sinister people are tracking their every move and will stop at nothing to steal their spell.

Dark Tidings is available in print and for Kindle on Amazon.com, and in print on Barnes & Noble.

Chapter 1 – No rest for the wicked

Way back in the medieval mists of time, long before most people counted which century was which, Tung shivered violently on an ice-cold, stone floor.

Dark, dank and putrid were the words an ancient estate agent might have used to glamorise this miserable dungeon. There were no words horrible or nauseating enough to describe what it was really like. To be fair though, it was not all bad, at least the green slime, which oozed like pus from small cracks in the walls, added some colour to the drab greyness.

Tung huddled in the darkest corner of the freezing, granite cell wishing he was dead. He would not have to wait long for his wish to come true because he was due to be tortured to death the very next day. Now he just prayed for sleep, because sleep would give him merciful nothingness before the excruciating morning.

Roll on death, he thought, it could not come a moment too soon. He was soaking wet, bruised, starving and parched with thirst. Yes, roll on death.

By some miracle his brain dragged his racked body into an uneasy slumber. Thank all the gods for sleep, at least he had not been denied that last sanctuary. His nightmares replayed his pathetic life as his subconscious tried to figure out how he had ended up in this tragic predicament. The work of the devil, no doubt… with a little help from his fiends.

The tortured dreams relived sixteen years of poverty, every day a battle to find enough food to survive. He had been born to a mother who, all through his childhood, had struggled relentlessly on his behalf, trying to stop his father drinking and gambling away whatever meagre wage he had earned. It was a futile struggle, trying to turn beer money into food money. So, most of the time, the family went hungry and, to add real injury to insult, there was usually a beating for anyone daft enough to complain.

Tung had loved his mother dearly, but before he turned twelve, she had lost the will to fight and had either died or run away; he never discovered which. Things got a lot worse after that and then only stealing could put food in both his and his younger sister’s mouths. Without his mother, there was no one to protect him from his father’s drunken wrath, so the beatings increased in regularity and harshness. His childhood descended into a nightmarish hell of torment and deprivation. His deepest distress was that he was helpless to protect his sister from these paternal abuses.

As he slept, his memory began to reconstruct the day of his first theft. That day was destined to determine how the rest of his life would play out.[subscribe2]