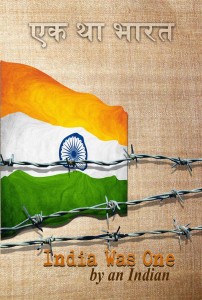 Today we get a sneak peek of author An Indian’s book, India Was One:

Have you ever imagined India being divided into two countries?  He was in South India and she was in North India…

Have you ever imagined India being divided into two countries? What happens to the millions of Indians who are from South India but are now residing in North India? Kaahi & Jai were two such people who got trapped in this situation. Everything was going smoothly for them and suddenly, their world turned upside down.  How will they get together? Will India become one again?

Take an exciting journey with them from their college days in Mumbai to their life in the US and back to India when they find out that India is divided.

India Was One is available in print and for Kindle on Amazon.com, on Amazon UK, and on Smashwords.

And now, from India Was One:

The man hurried through the jungle with a lantern in his hand. The tall trees swayed to the tune of the blowing wind. The long shadows – cast by the light of the lantern – danced as the man moved swiftly.

“जल्दी करो| वरना देखने नहीं मिलेगा (jaldi karo. warna dekhne nahin milega – Hurry up. Or you won’t be able to see),” he whispered in an urgent tone. Jai nodded, hurrying after the man with the lantern.

Suddenly, the jungle disappeared, giving way to an open area. They were standing on a hilltop. On the edge of the cliff was a makeshift railing of wooden sticks made from fallen tree branches. It looked as if someone had hurriedly built it to warn people to be aware of the deep ravine beyond. The man with the lantern hurried towards the far end of the cliff. It was the highest point with a great vantage point. From here, one could clearly see the mountains in the distance. Suddenly, Jai froze. He could see the man with the lantern hurrying toward what looked like a silhouette of a tall man. As the man with the lantern approached, the tall man didn’t move. He raised his lantern, and Jai sighed in relief. The silhouette was not a man; it was just a 6 foot tall tree. The man started to tear leaves from the top of the tree, and Jai realized that the man was not tearing the leaves but simply peeling them off to reveal what was hiding behind it. It was a very powerful stationary binocular, with a slot to insert coins. The metal glistened in the moonlight.

The man waved to Jai.

Jai hurried towards him, and the man showed him the binoculars. Jai smiled.

He quickly moved his face towards the binoculars. However, his face hit a leathery hand. Jai was confused.

“Why can’t I see anything?” he thought.

He backed his face away to see what was obstructing his view. The man had placed a hand on the binoculars, while the other hand was outstretched towards Jai.

“He is getting greedy,” he thought.

But he realized that there was nothing he could do. He was at the mercy of this man. He would have to pay whatever the man demanded.

“Just pay him. It’s worth it,” a voice inside his head told him.[subscribe2]

One thought on “Sneak Peek: An Indian’s India Was One:”