“Horror… Horror has a face… and you must make a friend of horror.” Colonel Kurtz, Apocalypse Now 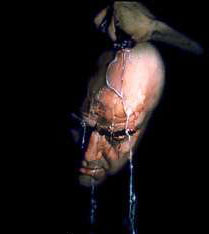 You’d think that horror would be one of the easiest of genres within which to write: create a protagonist who is either extremely likeable or go for the opposite, a character deserving of some particularly overdue and nasty payback; either invent or import a monster from Familiar Horror Trope Land (sparkly or not, preferably the latter); bring them together in some unexpected location and everything gets all squishy and liquidized and unpleasant and the audience members lose all control of their bodily functions and curse your parents… except that’s not necessarily what happens at all. Horror is hard to write. Okay, no, I just lied. Horror is easy to write, but good horror is hard to write.

Turns out you end up with a lot more decisions than you thought: do you go with quiet or splatter, traditional or transgressive, supernatural or psychological, gritty realism or more fanciful and fantastic? And that’s only the start. There are questions about suspense, how to build it, sustain it, let it go for a while, bring it back shrieking with ropes of blood-flecked drool and sheer malevolence (that’s another thing: beware overwriting; horror as a genre is particularly susceptible). Or endings. Tragic endings are more acceptable in horror than in most fiction, obviously, but does your story earn the especially awful nihilism it culminates in? I mean, what on earth did Frank Darabont think he was doing when he gave Stephen Kings “The Mist” that ending? You can’t give what is after all a solid pulp B-monster-movie, played for some comic moments, the existential, Kafkaesque, sheer dismal bleakness of that ending. I mean, come on… sorry, got sidetracked there. Ha. And anyway, film is a whole ‘nother area outside of our jurisdiction, thankfully. Point being, this shit gets complicated.

It wasn’t supposed to be like this. When you picked up your metaphorical Sharpie to write, you were thinking along the lines of something garish, with simple, bold lines, like a Saturday morning cartoon with scares, a largely fun carnival ride of the mind. It’s like you thought to yourself, I’ll just go watch Wile E Coyote and Roadrunner—how taxing can that be?—but you somehow forgot about the acid you dropped earlier and now the plight of this desolate, skinny canine with the gaunt, desperate face is making you dig your fingers disconcertingly deep into your own face and weep uncontrollably even before he pulls back the ominously creaking arm on that ACME catapult. And then… Every. Single. Horrible. Creak. Sounds. Like. The. Irrevocable. Closing. Of. A. Heavy. Crypt. Door…

But enough of William Shatner’s bizarre vocal mannerisms. The point I’m trying to make is that each choice reveals another level or layer, and so on, until you wish you’d never started this horror writing lark and decided to tackle something more simple… like calculus… rendered in Farsi… suspended on an inverted treadmill… over a nest of squirming pit vipers… while balancing a copy of The Collected Works of H.P. Lovecraft on your elbow… while solving a minor border dispute between two irritable Central American states.

So as the great—yet admittedly insane—Colonel Kurtz said, you must make a friend of horror. You must learn its mannerisms, its idiosyncrasies, its rhythms and patterns, winks and nods. Its, ha, heart of darkness (God, I annoy myself sometimes). Do not assume you know what makes it tick until you have read a significant number of the greats: H.P. Lovecraft, Bram Stoker, Mary Shelley, Edgar Allan Poe, Robert Bloch, Ray Bradbury, Helen Fielding, Richard Matheson, Ramsey Campbell, John Farris, Peter Straub, Stephen King, Chelsea Quinn Yarbro, Clive Barker, Poppy Z Brite, Joe R. Lansdale, etc (one of these writers doesn’t belong and I only added them for my own fairly inexplicable and no-doubt gratuitously childish amusement). All joking aside, you need to respect the genre in order to have a chance of writing horror well. Which is not a given. It’s no accident the horror genre has been referred to more than once as the red-headed stepchild of genre fiction. But, unless you’re out-and-out spoofing it, you need to. That’s basically step one.

And this is a mere taster of what you can expect if you’re damn fool enough to try your hand at writing horror fiction. Over the next few posts, I’ll explore further steps that will lead you to some unexpected places, both in the outside world and in your own increasingly demented head. But let me end here with one particularly notable banana skin. One word: bathos. If you don’t know it, look it up and we’ll wait for you… *hums the theme music from Top Gun for some odd reason* Done? Okay. Bathos will kill your story, and you will never live down a tale that builds incredible, heart-pounding tension, no matter how deftly or skilfully written, only for the characters to be confronted near the end by—say—a were-hedgehog or a vampire koala. There are some things that will never, ever be frightening. While there may be artistry and prowess in teasing out something disquieting about a bird bath or an old blackboard eraser, for example, you will never squeeze a drop of fear out of a garlic press or a beer coaster. Not even if you make them sparkly.