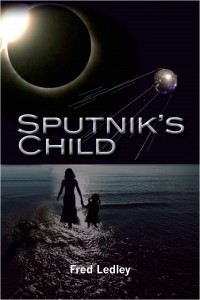 Sputnik’s Child recalls the events that shaped the ideas and lives of the baby boomer generation and laid the groundwork for an age of technology and its challenges. It is recognized as a Certified Imagination Product(TM) by the Space Foundation, and all proceeds go to support educational programs. Available in paperback and electronic editions online and by request at your bookstore. Visit www.sputnikschild.com for more information or on Facebook. This title is available from Amazon.

PREVIEW: In a penultimate science of the novel, Jackie is frustrated that the science she has supported has not produced a drug to treat her daughter’s disease.

“Ruben tried to tell me once,” she continued hysterically. “He tried to tell me that it is all just a bad trip—that everything ends this way—that everything ends in a bad trip. He told me that every time there’s a light at the end of the tunnel—every time we think we have wings—every time we start up some stairway to heaven—every time we start to follow a path that seems to go somewhere; it always ends in a bad trip. There’s always an explosion—everything burns and melts away; then there’s nothing except clouds and wind and rain and puddles and mud and no way to keep from getting wet.”

“He tried to warn me that the only thing that matters is not getting wet!”

“Maybe Ruben was right. It’s always a bad trip. Everything always explodes. I didn’t listen. He always smelled so bad,” she began to sob.

“Jackie, stop it!” Danny demanded. “Ruben had no idea what he was saying.”

“How do you know?” Jackie turned angrily to Danny. “Maybe he was right all along. Maybe Ruben was the one who had the right idea all along.”

“Stop it now, Jackie!” Danny shouted with agitation in his voice.

“Maybe we should have listened to Ruben instead of sending him out into the rain.”

“Jackie, he killed himself.”

Jackie’s anger instantly collapsed. She gasped. “He killed himself?”

“He jumped head first off a cliff overlooking the Pacific and landed on the rocks.” Danny’s voice was cracking in pain.

“You never told me. I didn’t know.” Her voice was barely audible.

“I care about you, Jackie. I don’t want you to go there too!”

“Was it an accident?”

“No. He thought he could fly.”

“I’m so sorry,” Jackie answered sadly, reaching out to touch Danny’s arm, but he pulled it away abruptly.

“Look, Jackie, you have your ideas, your foundations, and they’ve taken you a long way. Ruben wasn’t like you. He was always looking for a nirvana—a way out—a way to escape. You can’t go through life running away because it might rain. You know as well as anyone that, sometimes, you have to purposely go out into the rain and plant a tree.”

“What the hell does that mean?” she challenged him derisively, her voice again harsh and irritable.

When they were children, Danny had been unable to explain to Jackie the meaning of planting trees to reclaim a promised land from the desert and idolaters. Now, he again found himself searching for words to explain the idea to her.

“I tried to explain to you once—there is a tradition,” he started hesitantly, “a tradition which teaches that God’s creation is not complete—that it is still imperfect—that it is broken, that it is our responsibility to help it grow, to help it heal, to make it whole.”

“And if an all-powerful God couldn’t get creation right, then what on Earth makes you believe we can?” Jackie snapped.

“You do, Jackie,” Danny answered simply, looking deeply into her eyes. “You’ve believed that as long as I’ve known you.”

“What?” Jackie was incredulous.

“You’ve always believed everything could be fixed, and you’ve never believed in a God who could do it.”

Jackie stopped, transfixed by Danny’s penetrating stare. “Was I wrong?” she asked meekly, staring unblinkingly into Danny’s eyes, searching for the answer to a question she had first asked as a child. How do we know if an idea is right? How do we know if something is true? Ideas and images exploded in her mind. The voices of friends and family, saints and scientists, philosophers and priests all started shouting answers to her question in a cacophony of competing voices that drowned out the beating of her heart and the whirring of the planets and stars spinning through space.

Danny held her gaze for an instant, and then turned his eyes to the ground without a word. Jackie shivered and struggled for breath. No one else in the room even dared to breathe. A siren sounded on a distant highway. Unconsciously, Jackie listened to the tones to be sure it was not a warning that she should duck and cover.[subscribe2]