Today we have a sneak peek from author Melissa Pearl’s book, Golden Blood. 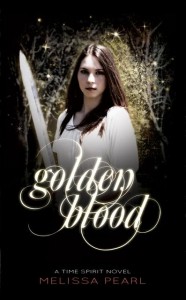 Gemma Hart never knows when her father is going to whisk her back in time. Her toes start tingling and she has a few minutes to find a secret haven where she can disintegrate and appear in another time and place. While “across the line,” her training and skills are put to the test as she completes a mission that will change history for the lucky few her father has selected.

Gemma’s parents are adamant that secrecy is paramount to her family’s safety. If people knew what they were capable of, they could be “used and abused”, as her mother always says. Afraid she might accidentally utter the truth and break the ancient oath of her people, Gemma spends her school days as a loner. Only one thing can throw her sheltered life askew… Harrison Granger.

Harrison never expected to talk to the strange Hart girl, but after a brief encounter he can’t stop thinking about her. He begins a campaign to chisel away her icy veneer and is met with unexpected consequences. As he slowly wins this girl over, he enters a surreal world that has him fighting to keep his newfound love and his life.

Golden Blood is available on Amazon.com, Smashwords,  and Barnes & Noble.

And now, from Golden Blood:

Gemma Hart pulled on her jeans and zipped the fly. Grabbing her shirt off the toilet seat, she threw it on and struggled to do it up. Her hands were shaking and still rippling with pins and needles. She bunched them into fists and shook them out before attempting her buttons again. Her fingernails shone gold, but that would only take another moment to fade.

She straightened her shirt, pulled on her black hoody and quickly assembled her long hair into a ponytail. Smoothing back any lumps, she fisted her hands for the last time. Flexing her fingers, she held them steady in front of her and examined the red knuckles on her right hand. They were still swollen, but the grazing was already healing. She ran a light finger over them, still feeling the man’s jaw crunch beneath her fist.

She frowned. It had been her only choice.

The phone in her back pocket dinged. With an irritated huff, she ignored the tone of the message and replied.

IM FINE. WHEN IS DEBRIEF.

She touched SEND and drew in a deep breath. The bell would ring soon and she didn’t want to be late for class. Gathering her bag from the floor, she checked her phone and made a mental note to be home by 5pm. Being late to class was one thing, but being late for a debrief was not worth the drama.

Unlocking the door, she peeked her head out of the stall and crept into the bathroom. She washed her hands and leant against the basin, studying her weary reflection. She knew her body would soon be fully energized again, but it felt like the older she got the longer it took.

She snorted out a cynical laugh. Seventeen and already worrying about aging? Yeah, she had issues.

The bathroom door banged open. Gemma’s body snapped straight and her gaze dropped to the floor. She could feel the curious glances. No one ever just skimmed over her. She was always studied from a safe distance; never approached. But that was her fault, right? She wasn’t exactly the friendliest girl at St. Augustine High School.

Clearing her throat, she lifted her bag, grabbed her binder and turned to look directly at the two bug-eyed freshman. They both looked to the ceiling. Gemma rolled her eyes and squeezed past them. What was the point?[subscribe2]