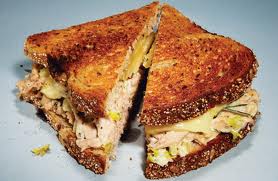 I’m wrestling this can of tuna. Not that I like tuna but he does and he’s out mixing concrete, says it would set if he stopped. His music so loud out there, he’d never hear me ask Help, he’d shout back to go –I won’t say what he’d say. Another reason I hate canned tuna — not just that tinny taste, though he grew up in a can-opener family –who knows if fishermen hauled in a dolphin. Stupid can-opener’s cranky. Rusty. Like me.

My Swiss Army knife in his toolbox. I use the long blade to cut bread, fish or bait, or all at once with a swipe on my jeans in between. Last week he snapped off my corkscrew. He’s that strong. Screwing around with this thick pry-hook you risk an artery or is it vein. Maybe those Swiss are trained for it, scared they’ll bleed chocolate or gold.

Like a rubber tree, could you tap a Swiss? I could use a pail of Swiss gold, a giant American Hershey bar…. I hook the cir-cum-fer-ence, most all I remember from math…

Damn! Nick my thumb on the jagged edge –blood flows in the brine.

We got good blood, Mother insisted, from somewhere.

I pry back the lid, hunt for the red bowl — He set it down for his dog.

Next, chop purple onions. I always cry but he loves his onions, doesn’t like sprouts but I add sprouts because we gotta use them up, and we’re out of cucumber, celery, anything else you add to stretch the mess and hide the taste. My cheek still purpled…I don’t dare go out, can’t ask next door even for one

antsy quarter-cup of sugar, a piddly tea bag even

second-hand. Mayonnaise jar empty. Must make it up fresh, hope the egg

is, crack the shell like a skull, sniff in case….Will have to do. He wouldn’t notice, onions so strong. I whip a dark yellow egg, dribble in the last tablespoon-worth of vegetable oil.

I’ll whip in his motor oil: behind the shed, one unopened can. Once he’s done the concrete, he’ll patch a roof. I help with the tar, find stuff. So we’ll be okay. A while. Mother says Gotta hang on, keep hoping for better. Pepper, vinegar, mustard, salt… Runny, but tuna’s dry, will sponge up the juice. I dump the can in the bowl.

Three cats meowl at my feet. They know that odor of tuna a block away. The way he can smell a ripe woman. In the mayonnaise lake, the tuna is oddly solid. Not chunked. Not flaked. Can’t get the can back to check which was meant, damn dog grabbed it away from the cats. But tough pussies, they will gang up

Tuna’s all in one piece shaped like a kidney bean. I better get my specs. Another thing he hates is glasses. He busted my last pair when I read a note in his trousers pocket –he’d told me to wash them – a name, phone number, on bright pink paper. Smelly. Women with names like Doreena use pink paper, pour on perfume. He stank worse than whiskey.

My glasses under the bed. I electric-tape them together.

He stomps in the front door, pries off his boots, shouts Why’s-lunch-not-ready-you bitch – Okay, okay. Hope he won’t notice the bread is stale. I jab in a fork, toast it over the flame. The way I’d like to roast that

He clunks in, washes up in the kitchen sink. I ask him “Please not, laundry’s soaking.” He says “Water’s already black.” Specs on, I check the bowl. Not tuna. Not any fish. About three inches long,

miniature hands, two miniature feet – Bent at the top, one lumpy, definite, head. “Where the hell is my lunch?”

He throws his puttied boots. Here he just washed his hands. Dries them on my shirt, starts to get fresh – “Later,” I say, mix quickly the salad. The thing finally breaks apart, not in flakes or chunks but my fork mushes it with onions and sprouts. I heap everything over toast on the blue-flowered plate, set it down on the oilcloth checkered yellow-and-white. I will eat up the sprouts.