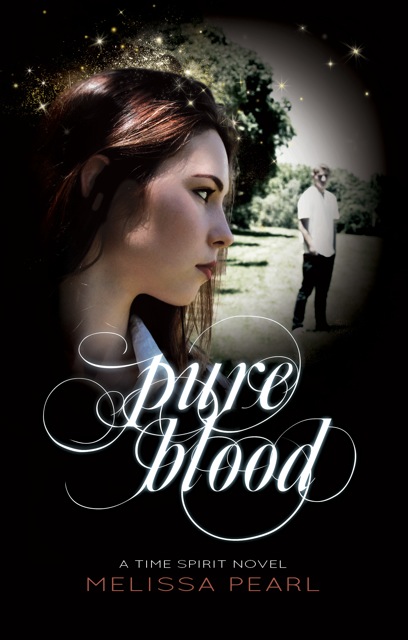 Today we have a sneak peek from the third book in Melissa Pearl’s Time Spirit Trilogy, Pure Blood: 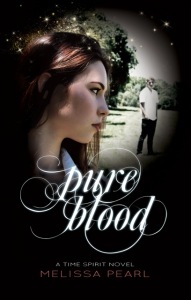 It is only a matter of time before Gemma’s parents find out she traveled through time to bring Harrison back into existence. The fear of being found out is a heavy weight on her shoulders, but she refuses to give up on everything she’s fought for. Harrison is worth the risk.

The couple draws closer together as they battle opposing forces from all sides. They stay strong until Gemma’s parents welcome an exchange student into their home. Simeon, a gorgeous Californian, is as smooth as coffee and, supposedly, a fellow time spirit. Gemma’s parents expect her to take him everywhere and, of course, fall in love with him. After all, he is the boy they have chosen for her.

No longer able to sneak off alone, Gemma must watch every step as she waits for the inevitable nightmare to catch up to her. Her parents ultimate goal is to get that last necklace and open the box hidden in their safe. If they do, Gemma knows her entire world will unravel.

As the danger mounts, Gemma must decide if she has the courage to make the ultimate sacrifice to save the ones she loves and stop to her parents’ destructive plans.

Pure Blood is available through Amazon.com and Smashwords.

And now, from Pure Blood:

She stopped at the threshold of the large cathedral, Basilica di San Giovanni in Laterano. It was one of the oldest cathedrals in the city and the official ecclesiastical seat of the Bishop of Rome. You know, the Pope!! Gemma steeled herself against the urge to turn and run. She knew exactly what they were here for and she would have done anything to stop it. But how could she, without throwing everything away?

“Gemma!” Ruby’s voice was sharp in her ear. “Stop standing there gawking at those pillars and get on with it.”

She blushed as she followed her sister’s tight frame into the interior of the grandiose structure. Ruby and Dom had left for college nearly a month ago and she was missing them desperately. Life at home was so quiet and dull without them. The only good thing about traveling was getting to see them again. She’d managed a micro catch up while they were shoving on their clothes, but she wanted more. Resolving to call her that night, Gemma returned to the task at hand.

Gemma would have laughed at Ruby’s incredulous expression if she hadn’t been so shocked herself. Gazing up at the gold pillars she took in the ornate structure above the altar then let her eyes travel over the angelic artwork gracing the upper walls. Her eyes soon dropped back to the barrier she would have to cross in order to achieve her task.

“How are we supposed to do this with all these people around? And what if it’s not even in there?”

“We’ll just have to be quick,” Gemma kept her voice even in an attempt to calm Ruby’s frantic jabbering.

“Well, everyone knows you’re the fastest so I’ll just try and distract.”

“Okay.” Gemma lifted the barrier and ducked beneath it. “Here goes.” Staying in a crouched position, she edged towards the altar and ducked behind the marble railing. Peeking up from her hiding spot, she turned back to assess the crowd and noticed Ruby chatting to a bystander. No one seemed aware of her jaunt into forbidden territory.

She crept back until she hit the bottom of the golden structure. Seeing the piece up close made her realize just how intricate the carvings were. It was stunning to look at and even more amazing to touch. Running her hands over the carved edges, she admired the mastery of the work before biting the inside of her cheek and loathing herself.

With firm fingers, she followed her father’s instructions and ran her hand around the back of the furniture until she felt a small crack. It took a few attempts, but she managed to pry the edge away and catch the piece before it hit the marble floor. She held her breath for a moment. The fear of being caught pulsed through her veins. She listened to the normal hum of milling people and released her breath. She had to trust that Ruby was keeping quizzical glances at bay.

With scampering fingers she felt inside the small compartment for the leather pouch her father had described. After a few minutes of desperate searching she nearly gave up, until the tops of her fingers brushed something on the way out. Turning her hand over, she felt the material, wrapped her fingers around it and yanked it free.

Gemma’s head whipped around. An angry guard was stepping over the railing and walking towards her. With nimble fingers, she shoved the pouch in her pocket, jumped to her feet and ran.