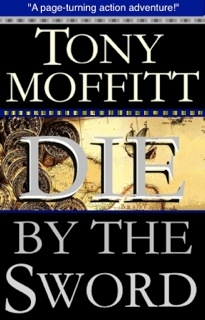 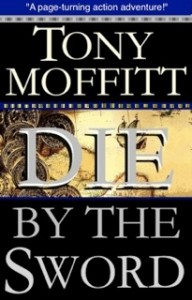 Today we have a sneak peek from Tony Moffitt’s action-adventure novel, Die By The Sword:

A 200 year old military secret that would change America and Australia forever… A hero unlike any other you have met before… An action-packed adventure that sweeps around the world from America to the storm-ravaged oceans of Australia’s Bass Strait. A tense mystery where nothing is what it seems and no one is who they say.

Die By The Sword is available through Amazon.com and Amazon UK.

And now, from Die By The Sword…

…We came up through the layer of cold water. There was no time to retrace our path to the drop-off area. No air to spare in the tanks. We would surface above ‘United’.

I glanced down between my fins. Tried to burn the image of the ship in my mind. Tried to take a mental snap-shot of the wreck site.

It was rising from the sandy seabed. Coming up slowly. Effortlessly. Gliding like an angel of death.

It came closer. Hunted through the darkling curtains of misty blue water. I wrenched Kawalski’s shoulder. Pointed. Felt him stiffen.

I wanted to flee. But there was no escape. I hung motionless in the water. Kawalski finned close beside me. The shark suddenly veered with an imperceptible twitch of its muscled tail. Passed before my eyes.

A white pointer. It glided past me in a demonstration of its sheer size and power. Jaws hung slack. A parody of a smile to reveal the rows of serrated teeth.

It was maybe eight feet long. Not large – unless it’s staring you in the face. The thin vapours of my blood had drawn it like a magnet. Ignited the beast’s senses. It would be relentless in its instinctive urge to kill and feed.

I grabbed Kawalski’s arm. Gave him the ‘thumbs up’ signal.

We continued to rise. Slowly.

The big hunter swept before me again. Began swimming in that maddening circle that was the prelude to the killing lunge.

At the first decompression stage Kawalski and I hung in the water. Back to back. Held our bang sticks extended towards the shark. As it left the range of Kawalski’s reach, I took up guard. Watched the shark come closer with every pass.

The water changed shade as we rose. From blue to dark green. To light green. At the final decompression stage, light reached through the quick-silver shimmer of the surface. I risked a glance up. Wondered if the helicopter would be there for us. Knew that even if it was, the shark would not wait.

Then the shark attacked.

With a sudden stiffening of its tail the beast hunched itself. All the sleek grace gone. Now it was a monstrous hulking torpedo of dappled grey. It came at me. Swam straight as an arrow. I held the bang stick out like a lance. The shark seemed huge. Its broad back rippled through the water.

I let out a single steadying breath. In my ears it sounded like a weary sigh. But the fear was gone. No time. Now the instinct to survive took over.

At the last moment I wedged the bang stick tight against my side. I only had a single shot.

The shark came at such pace I could only guess when to fire. I kicked up. Two savage thrusts of the flippers. The cruel impassive head filled my face-mask. I felt its sinister gaping jaws drive onto the end of the bang-stick. I thumped the trigger…